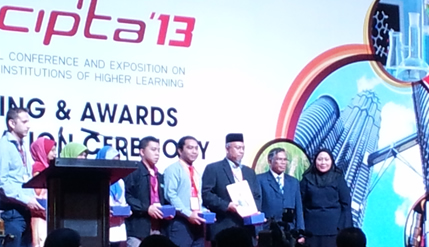 KUALA LUMPUR , Dec 17 2013 – The National University of Malaysia (UKM) won the Best and Most Creative award and a cash prize of Rs 3,000 at the inventors’ exhibition and competition known as PENCIPTA 2013 here recently .

The  Systems Process Engineering team of the  Fuel Cell Institute ( SELFUEL ) UKM invented a  Hydrogen Fuel Cell Car which clinched the honour of the Best of the Best Invention of the Year award .

According to Prof. Wan Ramli,   cells are environmentally friendly and have high energy efficiency of up to 50 % , compared with 30 % for a typical car engine .

He said the cell can be made small and easily built , lighter than a typical car battery (25 % by weight of the battery) and has a high energy density.

Fuel cell car engines do not emit any polluting emissions or smoke .

On the whole , he added , this car is very efficient with reasonable maintenance costs .

SELFUEL is planning to build a prototype fuel cell saloon car in the near future.

SELFUEL was  established in 2006 as a research institute in Malaysia to do  research on fuel cells.