City Dwellers Moving Back To Kampungs For A Better Life 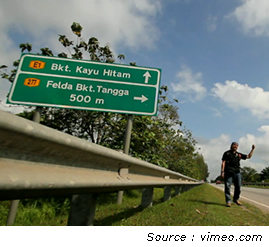 PUTRAJAYA, 21 Nov 2013 – A trend is emerging in Malaysia where city dwellers are returning to live in the kampungs again, according to the findings by two researchers.

Dr Nur Huzeima Mohd Hussain from Universiti Teknologi Mara (UiTM) and Dr Hugh Byrd from University of Lincoln United Kingdom found that there is a decentralisation of cities in Malaysia and a return to rural areas taking advantage of new technologies to assist new way of life and improving standards of living.

Their findings were presented in a paper “Balik Kampung is Malaysia Facing the Trends of De-Urbanization?” at an International Conference on Challenges of Extended Mega Urban Regions which ended here today.

Over 100 papers were presented at the Conference aimed at finding solutions for an environmentally sustainable development involving all stake holders.

The three day conference was organised by the Institute of Environment and Development (LESTARI) in collaboration with various other local and international bodies.

Amidst statistics showing that though rural urban migration is continuing worldwide, the rate is actually decreasing from 35% in 1995 to 26% in 2005 and expected to dwindle down to only 14% in 2015.

Dr Nur Huzeima and Dr Byrd detected that there was a limit to urbanisation. The reason cited was that cities failed to be the sustainable engines of growth and society in general will face economic hardships resulting in urban poverty.

This is because unlike those in the rural areas who can be self sufficient by farming, people in the city are not resilient enough to be so.

The study takes into account city dwellers who have returned to the rural areas. It found the new migrants can adapt to a new kind of life that involves farming and even managed to live above the poverty line.

Thus instead of facing economic hardships in the cities they can live a more sustainable life in the rural areas.

Dr Nur Huzeima and Dr Byrd said when people were migrating to the cities much of the land in the rural areas were abandoned. The younger generation who are supposed to take over, are not interested because they are consumed by the glitter and glamour of the cities.