Extra Credit Hours To Be Given To UKM Cadet Officers 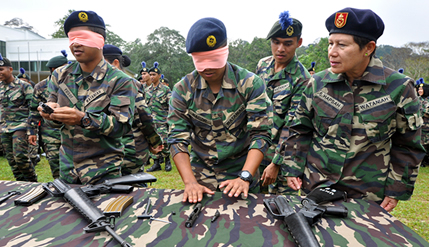 BANGI, 1 Nov 2013 –  Students of The National University of Malaysia (UKM) who joined the Reserve Officer Training Unit (ROTU) as cadets for the 2013/2014 session will be given extra 12 credit hours upon their graduation.

Vice-Chancellor Prof Tan Sri Dato’ Seri Dr Sharifah Hapsah Syed Hasan Shahabudin speaking at the Promotion and Official Opening Ceremonies of ROTU training here recently said the privilege will be given to students who are fully committed to ROTU in particular and to the university in general.

They are Lieutenant Dr Zaizul bin Abdul Rahman, a lecturer at the Faculty of Islamic Studies and Lieutenant Tey Sey Ek, a Fellow at the Tun Hussien Onn College.

The event held at the Kesatria Complex in the campus here marked the beginning of training for the 2013/2014 session.

The trainings are divided into three with local training to be held every weekend, the annual continuous training held during every semester break and the annual camp training.

Prof Sharifah Hapsah hoped the promotions would encourage the cadet officers to strive harder to be more disciplined cadet officers and good citizens.

The cadet put up a show of dismantling and assembling their M16 rifles at the ceremony.

There are a total of 456 cadet officers in the unit which includes students from Universiti Sains Islam Malaysia (USIM).