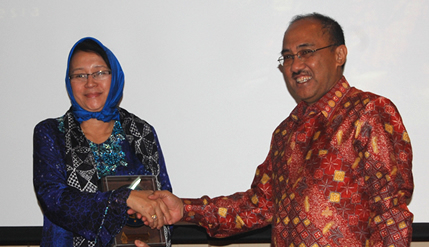 BANDUNG, INDONESIA, 15 Nov 2013 – The close relationship between The National University of Malaysia (UKM) and Universitas Padjadjaran (UnPad) began since 1980s has been further strengthened with the 13thIndonesia-Malaysia Cultural Symposium from 12 to 14 Nov here.

The bi-annual symposium this time on the theme “Innovation and Commercialisation For Prosperity and National Integrity” was opened by UnPad’s Rector, Prof Ir Dr Ganjar Kurnia.

He said more universities were now focussing on innovation, creativity and commercialisation in education to contribute to national prosperity and integrity.

The symposium was attended by academics from Indonesia, Malaysia, India, Bangladesh, Brunei and the United States to exchange views and experiences on how those elements can be absorbed for capacity building and to produce competitive graduates able to meet future challenges.

UKM Deputy Vice Chancellor (Research and Innovation) Prof Dr Rahmah Mohamed in her speech said universities needed to meet the aspirations and needs of the communities they served. Their excellence is judged on their ability to churn out resources that can support national development.

Their sensitivities and ability to respond to the dynamics of social, economic and political needs is one criteria of becoming an institution of excellence. Universities also needed to be proactive rather than merely reacting to various challenges in development whether at the national or global levels.

She said research findings of universities should not just be kept on shelves or merely published in journals but should be commercialised where possible for the good of the community and nation.

At the same time universities should also play their role to put in place a system where their graduates needed to be more dynamic to be able to create jobs rather than just becoming wage earners.

A total of about 200 working papers were presented and discussed covering a wide range of topics including security, food, health, ICT, culture, sociology, anthropology and language.