Call For Broader Cooperation Between Malaysia and Indonesia 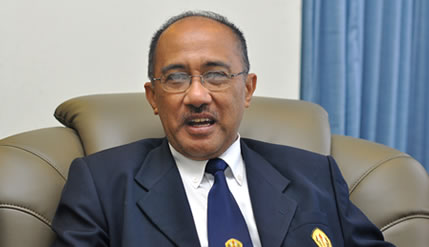 BANGI, 27 Oct 2013 – Malaysia and Indonesia should carry out broader education cooperation between them to mitigate misunderstandings about the culture and customs of the two countries.

Rector of the University of Padjadjaran (UNPAD) Bandung, Prof Ir Dr Ganjar Kurnia said the two countries should be more considerate of each other on the culture of the archipelago.

In an interview with UKM News Portal after being bestowed the honorary degree of Doctor of Philosophy (Educational Administration) from The National University of Malaysia (UKM) at its 41st convocation here today, Prof Ganjar said both countries inherited the homogeneous culture of the archipelago.

The award was in recognition of his contributions to cross-border collaboration in education across universities to reach out to the community, nation building and strengthening regional ties.

He expressed optimism over the long-term friendship built between the two universities to develop academically as well as forging close ties between Malaysia and Indonesia.

Among the cooperation between them is the implementation of the Indonesia-Malaysia Cultural Symposium (SKIM) which is held in alternately between the universities for nearly 30 years.

Prof Ganjar said SKIM has triggered a variety of intensive development in the academic field not only between the two universities but also between Malaysia and Indonesia and beyond Southeast Asia.

The strength of the relationship prompted wider collaboration like the UKM-UNPAD medical studies began in 2006 which allowed UKM medical students a year’s sojourn in UNPAD in Bandung.

The effort was worthwhile, as UKM produced doctors with experience and knowledge about Indonesia.