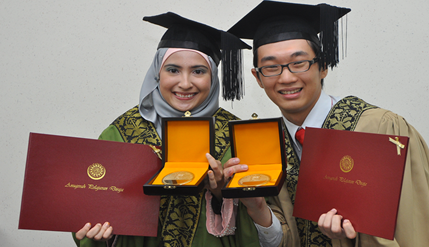 BANGI, 26 Oct 2013 – A graduate of the Faculty of Engineering and Built Environment (FKAB) and another from the Faculty of Social Sciences and Humanities (FSSK), have won the Royal Education Award at the 41st convocation ceremony of The National University of Malaysia (UKM) here today.

Chin Chuin Hao from FKAB and Noorshazweena Kamaruddin from FSSK received the award for their outstanding performance in academics and co-curricular activities.

Dean of the Faculty of Engineering and Built Environment Prof Dr Ir Mohd Marzuki Mustafa said Chin had demonstrated excellence in academics and earned the dean’s awards in all 8 semesters of study.

Apart from the continued support of his family, Prof Marzuki attributed Chin’s success to coaching and guidance of his lecturers at the faculty.

Chin’s keen interest brought him to research conducted at the department and under the guidance of supervisor Prof Dr Andanastuti Muchtar, Chin managed to publish his research findings on the development of zirconia ceramic dental restoration materials in two international conferences.

Prof Marzuki saod Chin not only focused on his academic studies but was also active in extra-curricular activities such as the Malaysian Red Crescent Society and the Mandarin Club at Keris Mas Residential College.

He and his team members earned international fame for UKM when kthe team became champion at the Shell Asia Eco Marathon 2012 in the solar car category.

For Noorshazweena, the Dean of the FSSK Prof Dr Hazita Azman said the graduate pursued human development after trying to study pure science at another university.

Prof Hazita said Noorshazweena was very compassionate and helped others to achieve their dreams in the field of Humanities and Civilization.

At the FSSK, she immersed herself in scholarly pursuits, leadership and volunteerism. Among the activities she pursued was taking part in the World Youth Leaders Forum in Hong Kong and presented her study poster titled ‘Opening Doors to Empowerment’ under a social theme.

During her studies at UKM, Noorsyazweena highlighted her skills in various fields that garnered her numerous awards.

She was also active in the Zaaba College Citra Theatre Club and has led various programmes organised annually by FSSK and colleges.