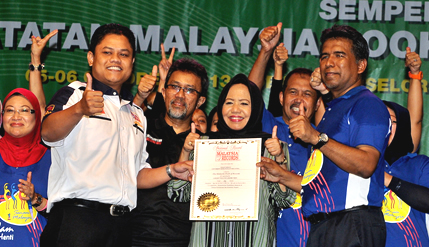 BANGI, 7 Oct 2013 – The 36 hour non-stop aerobics exercise challenge, SenamSeni 1 Malaysia that was held at The National University of Malaysia (UKM) for two days had successfully entered the Malaysian Book of Records.

A total of 2380 people took part in the record breaking exercise which began at 10 am on Saturday (Oct 5) ending at 10pm on Sunday (Oct 6) at the Tun Abdul Razak Hall (DECTAR) in the campus here.

It was organised by UKM Sports Centre with the cooperation of the Ministry of Education and the National Culture and Arts Department (JKKN).

Participants include staff and students of UKM who were joined by students from other universities, polytechnics and community colleges, officers from various government agencies and Telekom Malaysia.

Divided into groups they took turns of 30 minutes each on the DECTAR stage to ensure the continuous exercise. The shifts change coming on and off the stage was crucial as should any member of a group stop exercising or moving while on stage, the challenge would have been void and stopped immediately.

The SenamSeni 1 Malaysia was first introduced by the National Culture and Arts Department in 2008 to promote a healthy and active lifestyle. The previous record was the 26 hour non-stop aerobics exercise in Johore in 2010.

Deputy Vice Chancellor (Students and Alumni Affairs), Prof Dato Dr Ir Othman A. Karim who officiated the start of the event joined in the exercises. He was joined by the Deputy Director of JKKN, Mohamad Razy Mohd Noor and the Secretary of Sports of Higher Education Department, Hazally Jali.

“The SenamSeni 1 Malaysia apart from promoting a healthy and active lifestyle is also aimed at strengthening ties between staff and students of UKM, to build a stronger team spirit and work ethic and to enable them to meet new people, Prof Othman said.

Director of JKKN, Dato’ Norliza Rofli, who closes the challenge joined in for the last 30 minutes of the exercise.

The Malaysian Book of Records representative, Zuhairi Mat Zain attended the closing ceremony and oversaw the last two hours of the aerobics challenge and announced that the 26 hour J-Aerobic record in Johore.

On the 6th of October at 10 o’clock at night, the digital clock sounded, marking the end of the challenge.  En.Zuhairi announced that the 26 hour J-Aerobic record in Johor had officiallybeen broken and the 36 hour non-stop aerobics by UKM has successfully entered the Malaysian Book of records.