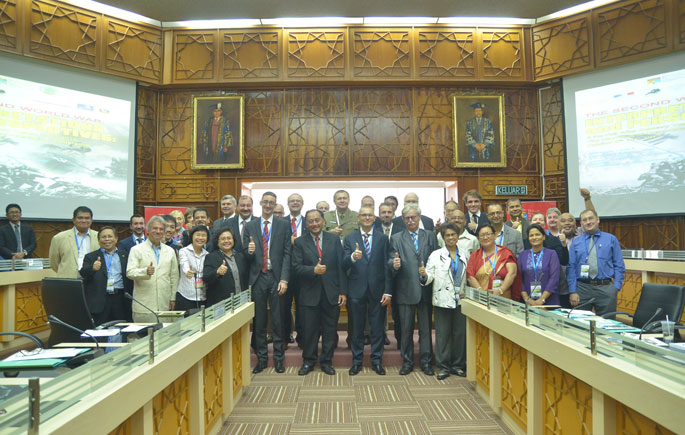 There have been many such accusations from survivors from countries  claiming compensation from Japan but they cannot be linked directly to Tokyo, said Historian Prof Dr Fujio Hara, Professor (R) at Nazan University in Nagoya, Japan.

Investigations into the matter following pressure from Asian governments, did not support such claims, said Prof Fujio at a conference about the Second World War here on October 8.

“In 2007, the Japanese government made a cabinet decision. No evidence was found that the Japanese army or the military officials seized the women by force,” he said.

He said successive Japanese governments had been inundated by claims from survivors and governments alike, but all that can be proven was that the prostitutes or ‘Comfort Women’ were recruited by force.

Prof Fujio was replying to a question from the floor after his keynote address titled ‘Southward Advance Theory Advocated by the Japanese Who Had Economic Interests in Malaya’ at the conference co-organised by the Institute of Malaysian and International Studies (IKMAS) of  UKM.

He said the brothels were quite likely set up by local entrepreneurs to exploit the needs of the many Japanese soldiers of the invading armies.

In his keynote address, he explained that one of the factors of Japanese aggression in East Asia was that Japan wanted to protect its economic interests in territories under European colonial rule.

However, he also admitted that Japan invaded East Asia to secure the  natural resources that it lacked.

He said South-East Asia had rubber and tin which were very important for Japanese industries, but the military government became very annoyed when Britain and France placed trade embargoes on all exports to Japan.

He also pointed out that there were already strong Japanese presence  in Malaya, Singapore, The East Indies (Java), French Indo-China (Vietnam) and the Philippines long before the war.

“Japanese economic activity in Malaya dates back to the late 19th century. Japanese migrants in Malaya worked in the rubber industry as small-holders supplying Japanese companies.

“There were 14,000 hectares of rubber trees owned by 11 Japanese companies in Malaya while 4,000 hectares were set aside for small-holders.

There was also fishing in Malayan waters, but by the end of the 1930s, the British colonial authorities placed heavy restrictions on Japanese fishing fleets from Okinawa.

Even iron ore was mined by Japanese companies in Malaya.

“In 1916, the Japanese started exporting iron ore exclusively to Japan. A Japanese company mined iron ore in Dungun, Terengganu. Malaya was the largest source of iron ore for Japan, but when war broke out in 1941, the British froze all Japanese assets,” he said.

The conference was organised by IKMAS, Goethe-Institut Malaysia, Centre of European Studies of the Lund University (Sweden), Embassy of France and Embassy of Poland in Malaysia with the support of Japan Foundation.