Despite Misgivings About Food, Kazakhstan Students Impressed With Malaysia 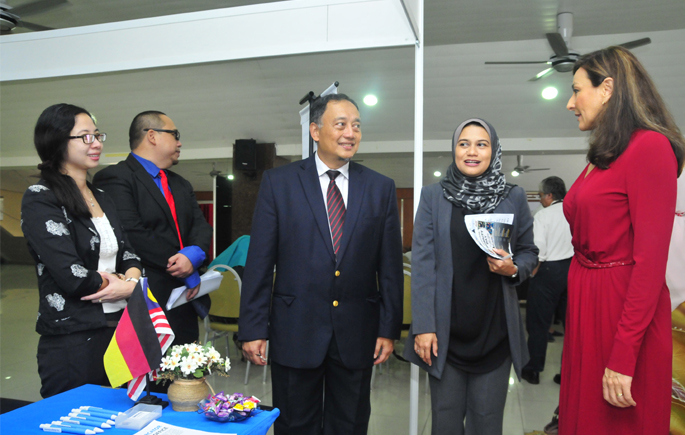 BANGI, 29 April 2015 – The warmth of the people of Malaysia and its stunningly beautiful tropical waters have left a lasting impression on four students from Kazakhstan, who were taking part in a student exchange programme for one semester at the National University of Malaysia (UKM).

They – all of whom are doing a Bachelors course in English at the Faculty of Social Sciences and Humanities (FSSK) – became interested in the culture and traditions of Malaysia when exploring the country and enjoying the company of the local people.

When interviewed by the  UKM News Portal Forum at the Mobility Day and exhibition organised by the Centre for International Relations (PHA) here today, they told me how much fun it was traveling around Malaysia and visiting specific institutions such Bank Negara and various museums in Peninsular Malaysia and Sabah and Sarawak.

Nevertheless, local food is the only apprehension they have and they said they felt home-sick sometimes while missing traditional Kazakhstan.

Aidana Duisenbi, 20, from Almaty, said  Malaysia is a safe country and she did not have to worry when going sightseeing.

“We can get help if we get lost. Local people helped show the way. No problem when traveling to places that are less known.

“We visited Pulau Perhentian for five days. Although it is beautiful and I dived into the pristine water to see tropical fish I did not like the hot weather,” said Aidana, whose parents are both retired public servants.

Kazakhstan is a Central Asian country that occupies the two continents of Asia and Europe. It is surrounded by Russia to the north and west, China, Kyrgyzstan and Uzbekistan in the east and the Caspian Sea to the southwest.

While Aidana does not like spicy food, there are dishes that she took to heart.

“I love chicken fried rice, but I have to order to reduce the chilies,” she said coyly.

Like her compatriots, Aidana is a student at the Kazakh University of International Relations and World Languages ​​(UIRWA) in Almaty. She wants a career as an interpreter when her formal studies end. She has three sisters and an elder brother who is a civil servant.

As with her fellow Kazakhs, this is the first time Aidana has gone abroad.

Gulnar Bakytzhanova, also 20, said she does not feel like a foreigner in Malaysia.

Gulnar likes to eat fried rice with rose syrup drink, but when she and her friends craved for traditional Kazakh food, they go to Seri Petaling, Kuala Lumpur to dine at the Astana restaurant, named after the capital of Kazakhstan.

“We miss Beshparmak, which is pasta with beef. Kazakh people eat less rice, but we can adapt to the local environment, ” she explained.

About studies at UKM, she said the English course in FSSK is quite comprehensive and complete. Gulnar, like her colleagues, attend a courses for the 3rd year and will continue to the final year when they return to UIRWA after completing their course at UKM in July.

“I want to pursue a Masters degree and then serve as an instructor at Teachers Training College, or become a lecturer at university or college.

“I want to study abroad before starting work. I am interested in participating in a student exchange programme, ” she added.

Aizada Tabyldiyeva, 19 years old, has a different attitude about the weather in Malaysia, as she likes it that way.

Hailing from the city of Aktau, she said Malaysian weather now is like summer in Kazakhstan.

Aizada also wonders how there can be a shortage of water on the campus, while it rains almost every day.

She wants to pursue a Masters degree in English in Poland or the Czech Republic. After that, she wants to follow a career as a lecturer.

Aiganym who plans to continue her  education for a Master’s degree in Australia,  is very impressed with the environment in Malaysia.

“I feel comfortable in this kind of green environment. However I do not like the heat.

“Here, one sweats a lot outside. In Kazakhstan, as it is arid, you don’t sweat,” she said.

The most interesting trip for her was to Pulau Perhentian where for the first time they went on a ship and scuba-dived in clear waters.