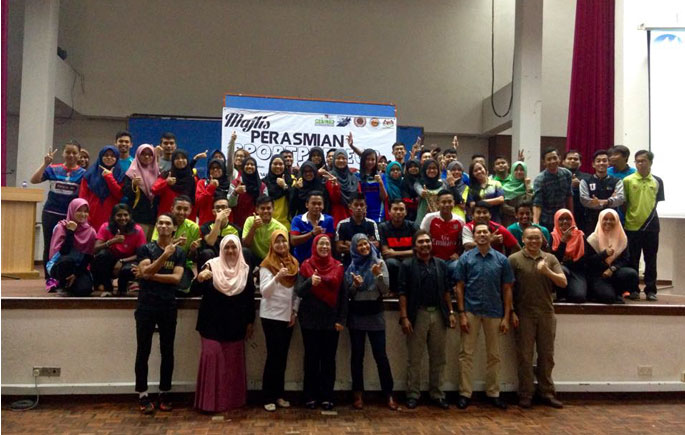 The students after the opening of the Sports Entrepreneurship Programme

Report and pix by Ng Yung Shuang and Nadya Rizal

BANGI,  18 Dec 2015 – Students in Higher Education Institutions willing to become entrepreneurs  after graduation will be given adequate training through the Job Creator Framework framework of the Higher Education Ministry.

Zuraidah Mohamed Said, Assistant Chief Secretary of the  Entrepreneurship Unit of the ministry, said a  special programme to develop entrepreneurs in sports has garnered good response.

She was speaking when launching the Sports Entrepreneurship Programme here on 28 November.

“The ministry has a framework known as ‘Job Creator Framework’ in particular to change mindset of students from Job Seekers to Job Creators”, she said at the ceremony.

According to her, entrepreneurship is not something new at the ministry.

In 2010, the university entrepreneurship programme was launched to implement the education and development of entrepreneurs as one of the important agenda to strengthen institutions of excellence.

“My hope is that students can benefit from electives such as entrepreneurial venture in addition to the core subjects in preparation of looking for a job later,” she explained.

She added that the field of entrepreneurship is not difficult to explore as the scope and opportunities are enormous in the future.

The students were urged to try to become entrepreneurs to get more benefits than just working for a salaried job.