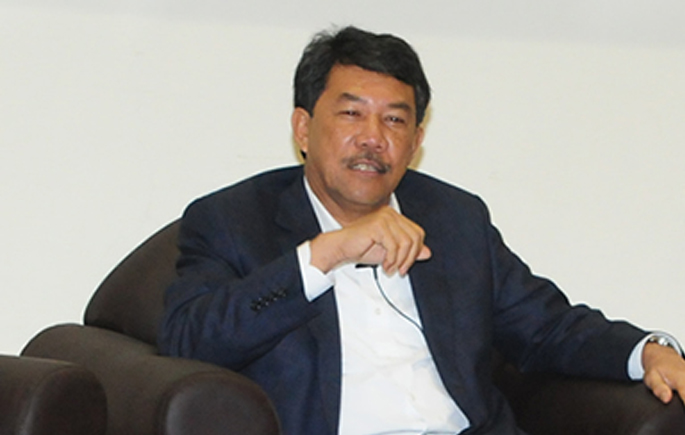 BANGI, 7 May 2015 – The country needs to run the government’s civil service bureaucracy to become more efficient similar to that of a corporation.

Governments must have a balanced budget although they don’t have a profit and loss agenda, by looking at expenditure as an investment, Mohamad said while speaking at a forum titled 360 degree Leader: Up Close and Personal, organised by the National University of Malaysia’s (UKM) Graduate School of Business.

“Every RM1 spent, take it as an investment. The investment must yield good dividends, because the money comes from the public. If the money is to be spent, how it is used must be thoroughly thought out because it is investment using the rakyat’s money. You must think carefully before spending public money and make comparisons with other potential investments.

“Don’t spend people’s money recklessly. It must be managed as best as possible,” said Mohamad, who has considerable experience in the corporate sector before going into politics.

“When I became Menteri Besar (of Negeri Sembilan in 2004) the state budget was RM50 million in the red. I had to borrow from the federal government just to pay the salaries of the civil servants. Alhamdulillah, now we have reserves of RM 500 million, with the debt down to RM236 million from RM2.4 billion.

“You can never go wrong by investing in property in Negeri Sembilan,” he explained.

When asked by one of the moderators what is his secret to effective leadership, he replied one must have wisdom because knowledge by itself  is not good enough.

“Do only what you know, not what you want. The downfall of many bumiputera companies is diversifying into businesses you know nothing about,” he advised the post-graduate students who attended the forum.

Mohamad, however, admitted that he is not an easy man to work under because he is quite demanding of the staff in the state government of which he runs like a business.

“Since I became MB, I went through 5 State Secretaries,” he said.

He wants to change the mindset of civil servants from providing service to offering service.

Instead of waiting for members of the public to come to the government for help or service, he sends officers out to look for people in need.

“Many people are either to weak or too poor to come to us to seek advice. We have to seek out these people because they cannot come to us.

“Gone are the days in government when you have the complacent ‘take it or leave it’ attitude towards services,’ he clarified.

He said leaders and officers in government should give people hope, but not false hope. Don’t make promises that you cannot keep which results in the public losing faith in government.

Answering another question about effective leadership, he cautioned budding young leaders against falling into the trap of relying on favourites.

“Too often we become too close to favourites and people resent this. If we want people to respect us, we have to respect them,” he stated.

He also urged leaders to listen closely to youths, because they also want to have a say in how governments deal with them.

He added that the reason many young people today are angry is because little is done to provide sporting facilities for them.