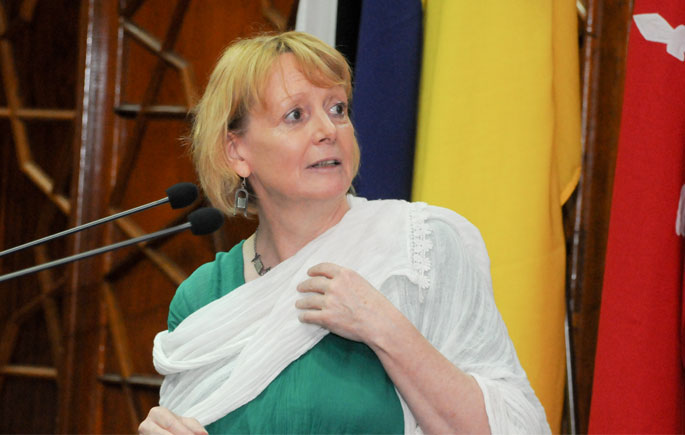 BANGI, 29 June 2015 – The ease of learning to read may depend more on hearing the words being spoken and the type of language being learnt.

Prof Patricia Riddell of the University of Reading (UK) said research seemed to show that reading depends more on recognising and making sounds, rather than perceiving letters and words in print.

According to the Psychology and Clinical Language Sciences lecturer, research in her country the United Kingdom showed that phonological awareness is important when learning to read, but that is not to say that visual or orthographic basis is less important.

“Visual component of reading depends on mechanisms that were not evolved for the adaptation. Early processing is suitable for small visual features at particular locations because Reading requires the ability to detect larger features (letters) at multiple locations.

“There is therefore a compromise necessary between detecting individual features in any location (a particular letter in any position in a word) and multiple features in one location (any letter in a particular position in a word),” she said while delivering her keynote at the Malaysia International Psychology Conference 2015 here on June 10, 2015.

Orthography is the methodology of writing a language. It includes rules of spelling, hyphenation, capitalisation, word breaks, emphasis, and punctuation.

She said the research had been done in the United Kingdom to determine reading on the community development process in that country.

She said the case might be solved by using open bigrams in which a particular letter can be recognised in any case, and in a limited range of positions within a word.

“ In this research the twisty text experiment was used. It could be to investigate visual noise, cross-cultural differences in single word reading and decoding of regular and irregular words,” she explained.

According to her, for investigating visual noise, research was done on 16 adults previously diagnosed with Selective Dorsal Rhizotomy (SDR) by a clinical or educational psychologist, while 18 other adults had no history of reading difficulties.

“The research result showed all participants had an IQ above 100 and reading assessed using the Woodcock-Johnson word identification and it was used to calculate a reading discrepancy score,” she said.

“Since rotation affects the ability to read the combinations of letters that are required when decoding some English words, reading is more difficult under rotation in this orthography,” she explained.

She said that the third method be used are to investigate decoding of regular and irregular words.

“Regular words were more affected by rotation than irregular words in both our lexical decision and naming tasks,” she added.