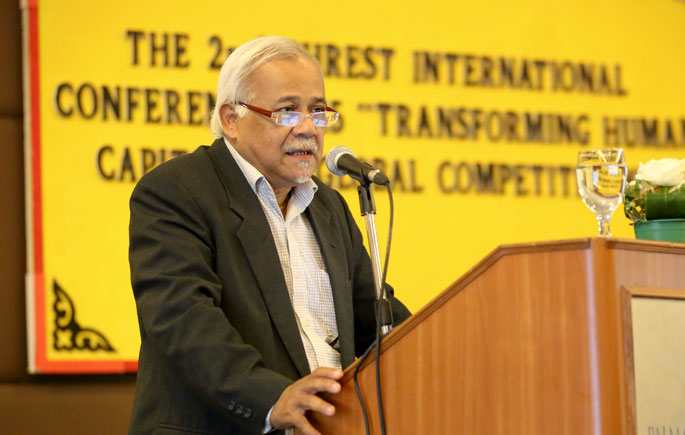 BANGI, 21 June 2015 – A major challenge to Malaysia becoming a developed nation by 2020 is the fact that the country’s wealth distribution is very skewed and unequal, with only fifteen families controlling 76% of the country’s Gross Domestic Product (GDP).

Economist and Chairman of Yayasan Mahkota Tan Sri Datuk Dr Kamal Salih said generally the more developed economic would have comparatively high productivity and a good spread of wealth among most of the income levels.

“However, in Malaysia, maybe about 100 individuals own 76% of the country’s wealth,” Tan Sri Kamal said in his keynote address at the 2nd CHREST International Conference 2015: Transforming Human Capital For Global Competitiveness, organised by The National University of Malaysia (UKM), here from June 10th to 11th.

He said Malaysia is still sitting in what some economists call a ‘Middle Income Trap’.

“In order to move to a developed nation status, the national competitiveness should equal sustained high growth in a non-zero sum world economy.

“Higher growth than the current gain is needed, and that requires massive job creation, raising the scarcity value of labour. As a result wages rise, spreading wealth.

“Our productivity should increase, our trade should improve. Demand for our goods should rise in order to achieve vision 2020. Our potential growth showed a decline. We have not been able to sustain that growth of between 4.5% to 6%”, he clarified.

According to him, sustained growth leads to elimination of poverty.

However, such indicators have not be forthcoming, he said, because 5% growth annually would not be enough. As a matter of fact, he pointed out, in the present quarter, the growth actually went down by as much as 4.5%.

Poverty still persists and relative poverty means those in the lower 40% of wages still constitutes 20% of the population, he argued.

Those who are deemed as ‘middle class’ and above, that is between 10 to 15% of income earners, only have 14% of the country’s GDP.

“If you want to achieve an equitable growth, you must have inclusiveness in the bottom 40%,” he said.

Moving forward, it is plausible that economic inequality could widen in Malaysia in the near future given current challenges in the labour market, changes in education policy, and consolidation of fiscal policy to reduce the federal deficit.

Some 30 academics, some of them post-graduate students, were taking part in the two-day conference coordinated by the Centre for Human Resource Studies (CHREST), the Faculty of Economics and Management of UKM.