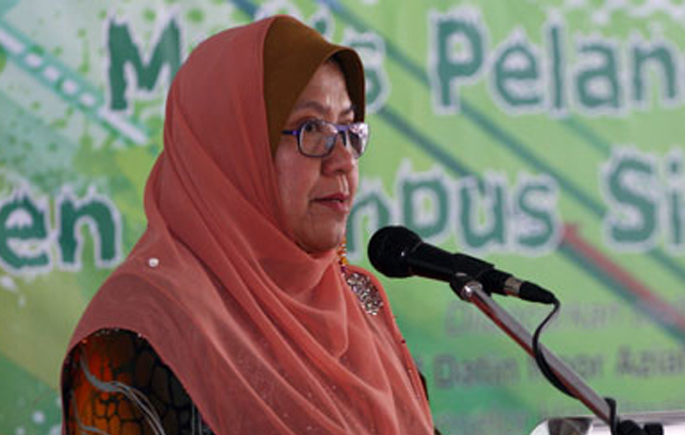 BANGI, 6 April 2015 – All food vendors and handlers at the National University of Malaysia (UKM) campus are prohibited from using polystyrene boxes with immediate effect.

Launching the Zero Polystyrene Campus Campaign here on April 1st, Prof Noor Aziah said one of the main environmental challenges on campus is the disposal of rubbish with huge quantities of polystyrene, which are not biodegradable.

According to her  all nine residential colleges with 9,000 residents or the total 15,000 people including staff throw away the polystyrene wrappings  after breakfast or lunch at various bins around campus.

However, waste polystyrene with plastic bags clogged some wells until they became useless with the trash spilling out.

Polystyrene is not biodegradable like some wastes and it will pollute the water in the campus area.

According to Prof Noor Aziah, the recent water shortage is also linked to the disruption of operations at the Bukit Tampoi wastewater treatment plant for 6 days.

Apparently, one factor is the water flowing out of UKM into Sungai Langat had been contaminated with polystyrene which is not easily eliminated.

“Although UKM has its own sewage treatment plant, the water discharged into Sungai Langat still contains polystyrene,” she explained.

Therefore, UKM took action to reduce the impact of pollution by prohibiting the use of polystyrene.

“So this campaign is just a start. We invited cafeterias and restaurants to reduce help reduce water pollution. All cafés in IKM have received directives from my office so as not to use. Instead they should use biodegradable packaging, or wrap the food for take away, ” she explained.

At the launch of the campaign, representatives of cafeterias and restaurants received campaign posters for the zero polystyrene campus campaign from Prof Noor Aziah.