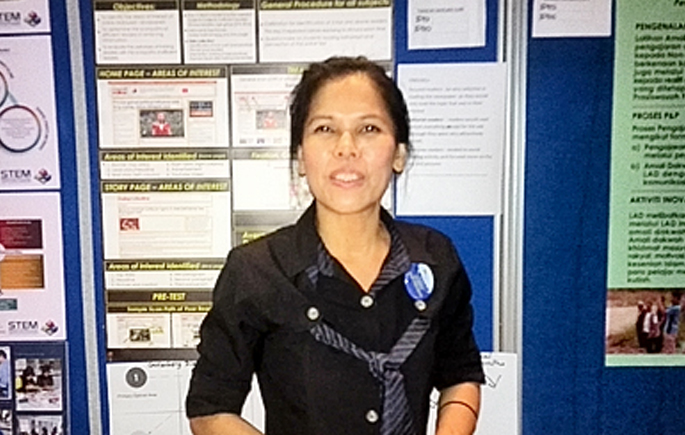 A researcher from The National University of Malaysia (UKM) Assoc Prof Dr Tan Kim Hua said news portals and websites need to review their layout of reports and articles in order to keep up with the changing reading habits of Malaysians.

Speaking to the UKM News Portal at the university’s K-Novasi Teaching and Learning Carnival here today, Dr Tan said one of the most striking findings in her survey was that many readers were reluctant to read long reports which could not fit a display page without scrolling down.

In her research paper titled ‘Efficient Virtual Reading Pathways in Malaysian Online Newspapers’, Dr Tan analysed some 100 students aged between 22 and 30 using eye-tracking devices to find out which part of a given web-page they spent more time on.

“The test subjects were more interested in reading the first few paragraphs after the headline and intro of a report after clicking on the header. They did not scroll down all the way but instead switched to another article or left the portal completely although there might be some other interesting articles.

“Many readers also spent more time at news portals with breaking news or news flash. They didn’t seem to mind about the very brief news, as long as it is the latest.  They were also more interested in pictures and reading the captions but less attracted to advertisements and banners,” the lecturer from Faculty of Social Sciences and Humanities said.

What Dr Tan found from efficient readers was eye movement from the top banner rather than to the headlines, indicating that the person gave priority to news content over advertisements:

For less efficient readers, there was a tendency to start at the top banner, even if it does not contain any news, in a top to bottom movement and left to right, in an automatic fashion that does not show the importance of content.

In her study which was aimed at investigating the subject’s behaviour during online newspaper reading, she found that from among the English language news portals, interest was higher for ‘ The Malay Mail’ and ‘Malaysia Kini’. However, she cautioned that there might be other reasons that the readers were more fixated on some portals rather than others.

The study went beyond eye-tracking and every test subject had to answer a test about what they understood about the reports they read. There was a direct correlation between the efficiency of readers and the test scores.

She concluded that most readers are ‘editorial readers’ who prefer articles that were editorialised rather than straight news. She also found that efficient readers tend to read around in an ‘L’ shape pattern and give less priority to pictures and advertisements.

Web’s layout, navigation tools, formats and styles of headline are essential aspects in creating a reader-friendly environment on websites, while placements of links and advertisement on the website in terms of usability are also crucial.

Dr Tan teaches e-Learning and Linguistic structures, including Grammar, Phonology, Lexicon and Semantics at the School of Language Studies and Linguistics.