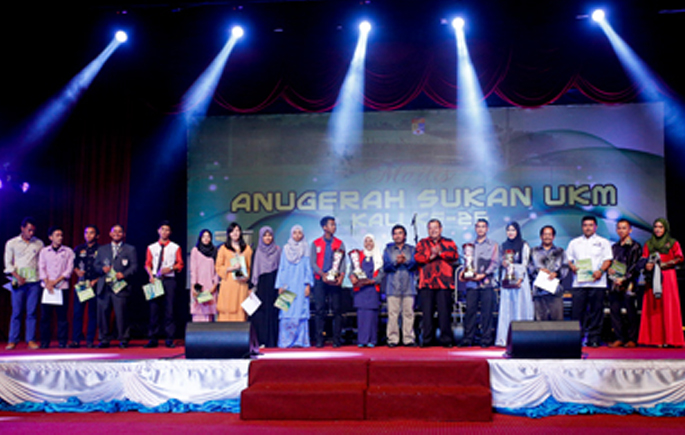 BANGI, 24 March 2015 – Two students who had shown brilliance in cycling at national levels were honoured at the The National University of Malaysia (UKM) 25th Sports Awards Night 2015 .

Mardiana Mohamad, 21, a second-year student is the winner of two gold medals, one at the SUKMA Games sports bike championship in 2014 and another at the International Border PDRM challenge as well as several other medals that made her an obvious choice for the UKM awards.

M Asrul Taufiq Annuar, also 21 and a second-year undergraduate, in  2014 had  carved out a niche for himself which included gold medals at  the National Track Championship, Batu Pahat HS 100, and the National Youth Championships Trek.

Prof. Noor Azlan congratulated all the winners whom he described as a credit to UKM.

He said UKM will also try to pay salaries to coaches equivalent to the earnings of academics and other experts at the prfessional level.

Dr Tajul Arifin, in turn, said all students should take part in organised sports programmes on and off campus. In addition to health benefits, it also helps building a sporting identity and attitude.

The UKM Sports Center has collaborated with the Ministry of Youth dan  Sports, as well as some corporate entities. In 2014, 18 students received sports scholarships from the Sime Darby Foundation in their duration of studies. In the future UKM will collaborate with several non-governmental organisations.

Gifts in the form of trophies, awards Certificates and cash money were given away by Prof Dr Noor Azlan Ghazali and Dr  Tajul Arifin.

In addition to the awars ceremony, the audience were also entertained by  by various dances and songs performed by students.

Winner of the sportswoman award, Mardiana Mohamad told the UKM News Portal she started sports cycling in primary school and became even more diligent by the tume she reached University.

Mardiana said in order to be successful in sports, one must remain  consistent and focused.

She advised all students not to give up easily because failures often  occur before success.

Winner of the sportsman award M Asrul Taufiq Annuar, said he had recieved support in his bid to be a winning sports cyclist by his elders .

He said he had never neglected his studies while giving due arrention to cycling.

He advised students eager to make it big in sports to stay healthy and keep fit in order to be successful academically as well.

Here are the names of the main prize winners at the 25th UKM Sports Awards  2015: