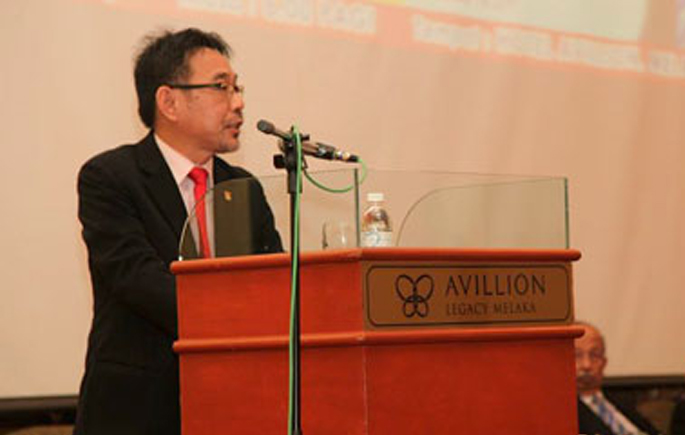 Melaka, 14 April 2015 – The National University of Malaysia (UKM) is willing to work together with the Malacca State government to reclaim the state’s status as a world-class maritime power.

“History has shown that the international port of Malacca in the golden age of the Sultanate of Malacca was able to bring together Malacca and China. So, efforts should be made to repeat the success,” he said in his speech at the Seminar of Malacca as International Maritime Port, here yesterday.

He said experts from UKM in various fields can do research, framing of state economic policy and training of human capital in order to achieve the objective.

“With UKM Pakarunding I’m sure this is possible, and it will be able to play a leading role to coordinate the collaboration,” he added.

“We will gather experts in various fields, not just history and archaeology fields, but also the Malaysia Maritime Enforcement Agency and the Economic Planning Unit. They will present the working papers and we will study the outcome.

He had already discussed with Prof Imran several research projects it will participate.

“Among them are the environmental impact assessment on the coastline because when we build the port, we must clean up the sludge as mentioned by the Chief Minister,” he said.

Meanwhile, while presenting his working paper titled ‘The Grandeur of Malacca’s Diplomatic Ties ’, Dr Mohamad said the Straits of Malacca is a safe waterway.

He said, the international free passage concept is an important element to bring ships to drop anchor in Malacca.

According to him, the role of Malacca was not just entrepot trade, but the city was a source of goods sent out to other parts of the region.

The one-day seminar attracted 13 presenters from various disciplines and agencies. The seminar was organised by the Institute of History and Patriotism Malaysia (IKSEP) in collaboration with UKM and the Malacca State Government.