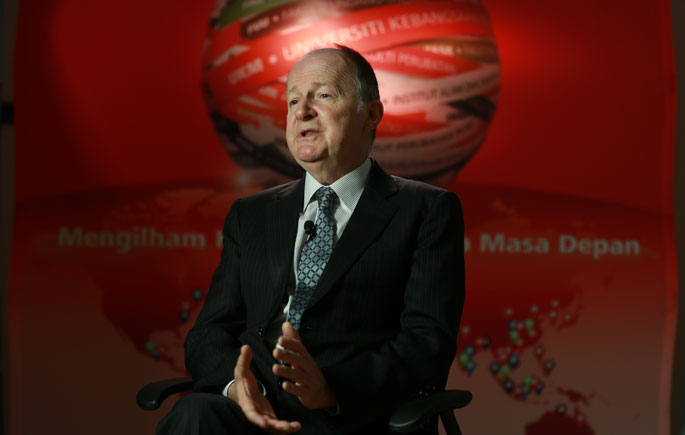 CHERAS, KUALA LUMPUR, 20 Jan 2016 – The Advanced Surgical Skills Centre (ASSC) of The National University of Malaysia (UKM) is an outstanding facility to hold examinations for doctors wishing to sit for advanced surgery qualification,  said the President of the Royal College of Surgeons of Edinburgh (RCSEd) Mr Mike Lavelle-Jones.

The ASSC is a world leader when it comes to holding one of the most prestigious qualifications for surgery, the Objective Structured Clinical Examinations (OSCE) and is even better than similar ammenities in Britain, said Mr Lavelle-Jones, who was at The ASSC to examine the third batch of OSCE candidates here today.

He acknowledged that he was so impressed that he hopes that in the near future the facility would become a partner with RCSEd  to become a hub for candidates in the region to take their examinations.

Speaking in interviews with the UKM News Portal and Web TV, he said the ASSC has state-of-the art equipment and a conducive environment for both examiners and candidates alike.

“It really is an outstanding facility. I have the opportunity to examine (facilities for OSCE) in many places, across Asia, the Indian Subcontinent, Middle East, and of course back in the UK, and I have to say that this facility, it seems to me,  without a doubt exceeds all facilities we have in the UK, and clearly is a world leader and is undoubtedly one of the best for educational assessment,” he elaborated.

He said he’s glad that his predecessor at RCSEd Mr Ian Ritche had close contacts with ASSC Director Assoc Prof Dr Hanafiah Harunarashid – who is advisor to the British institution – and actively supported an  International Medicate Graduate Sponsorship Scheme which expanded its programme overseas.

“Well we first came in contact with the ASSC through Prof Hanafiah, really when it was just a design on the drawing board. And it appeared then that this was going to be an outstanding facility, and as we watched it grow, and develop and got permission in 2012, it became very clear to us that this was the absolute ideal design and style of a  facility to run our first OSCE exam, and we had our first OSCE in November 2014 and my immediate predecessor Mr Ian Ritchie had the privilege of opening that exam, and we had just completed our third OSCE  examination session here, and I was taking part up until yesterday,” he explained.

He said RCSEd chose ASSC because the design of the building and examination space are suitable for examining and focusing on doing the examinations.

“Firstly, we were impressed by the bright modern air-conditioned space, and when you actually visit where the exams take place, there are walls and partitions. It has excellent quality for  sound, where there isn’t much background  sound when examining candidates. There can be up to 20 candidates moving around the space. It’s very well staffed, with individuals who are very well familiarized with the educational process. We have a brilliant place for examiners and candidates alike, absolute best performance from the candidates,” he further clarified.

When asked what makes an ideal facility for OSCE examinations, he said its more than just the equipment and building.

“I think its two things. First of all it doesn’t matter how good the hardware and the facilities are,  if you don’t have the right people, its not going to be so good,. Here, with the support of Prof Hanafiah, with the support the Vice-Chancellor and Pro-Chancellor and the local team that deliver the examinations, that’s what makes you so special.

“I was impressed by the standard, and it was an easy relationship, and clearly what we deliver in the UK, is so very similar to what is delivered at UKM. So that helps a lot,” he said.

As for the future, he expressed hope that the RCSEd  in partnership with the ASSC which ASSC would become the hub for the region. He hopes that it would be achieved within the three-year term of his presidency.

He said the also RCSEd wants to enhance the training programme for surgeons to develop a new curriculum where a programme for ‘training the trainers’ can be implemented here at the ASSC, too.

“Being a good surgeon is not only technical ability, there are other aspects, too, such as non-operative skills that we hope to develop with the Malaysian government and Malaysian surgeons through the ASSC,” he pointed out.

The RCSEd is the oldest Royal College of Surgeons in the world, established in 1505. It is a non-profit organisation that ploughs back all profits from activities,  back to education, training, research and assessment, the areas that the profesion of surgery is built on.

Mr Lavelle-Jones has been President of the RCSEd since November 2015 for a three-year term. He is a Consultant General Surgeon with an interest in colorectal and paediatric surgery. He previously held the positions of Honorary Secretary and Vice-President at RCSEd.

He will be back at the ASSC for a fellowship examination some time in September or October.

The ASSC is located in a five-storey building equipped with the latest technology in minimally invasive surgery and a Virtual Cadaver, making it the first such training centre of that magnitude in the region.