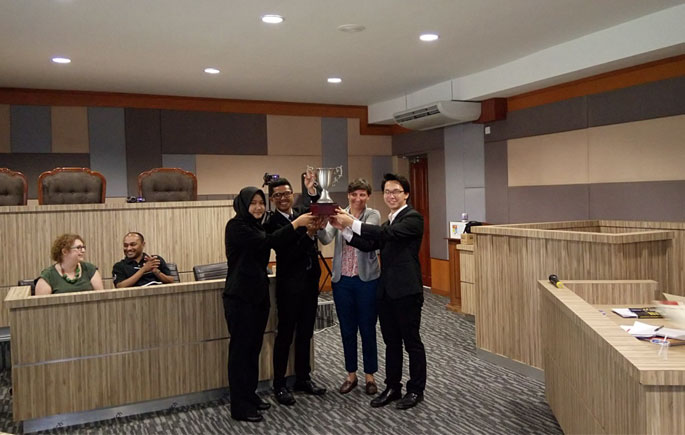 UKM ‘A’ The Champions

Team UKM ‘A’ took the top prize after three rounds carried out in the form of a Moot Court, with another UKM team taking third prize while Universiti Sultan Zainal Abidin (UNISZA) emerged runner-up in the inaugural competition held from 23rd to 25th Oct 2015 here.

A moot Court is part of the curriculum of Law faculties in which participants take part in simulated court proceedings, usually involving drafting briefs and participating in oral argument.

The competition is a role-playing game organised by The International Committee Of The Red Cross and Red Crescent (ICRC) in which each side argues against another using International Humanitarian Law (IHL) in an armed conflict situation.

Playing the roles of observers and arbitrators, participants are expected to be proficient in IHL to apply laws to protect the basic rights of civilians and other non-combatants while observing for violations of human rights or war crimes.

Claire Meytraud, Head Of Delegation of ICRC said the competition gives some idea to Malaysian law students on the conduct of war, including meeting prisoners-of-war.

“In present day armed conflicts, the challenge of upholding humanitarian values is not the result of a lack of rules but a lack of respect for them.

“We need to be prepared. As you get to a detention facility, you know what to do,” she explained just before the announcement of the results.

The captain of the winning team final-year student Abdul Wahab bin Jumrah, said in the current situation of terrorism around the world, IHL is vital in trying to protect the rights of people on both sides of the conflict.

“Malaysia might be peaceful, but who knows what will happen in the future. Maybe there will be wars, terrorism and so humanitarian law will be used to try to prevent violence from spreading,” he remarked.

Organising committee chairman of the competition Assoc Prof Faridah Jalil said lawyers and negotiators  must be proficient in international law to deal with an increasingly complex and violent world.

“In a world full of conflict, we need people who can talk sensibly and convincingly in a humanitarian manner,” she commented at the close of the contest.

Speaking to reporters, the ICRC regional legal advisor for South-East Asia Kelisiana Thynne said she was quite pleased with the quality of the students.

“They’re really good, it’s the first time having a moot competition in role-playing. Scores improved dramatically over the three rounds.

“The contest was exclusively done sitting in rooms. There was no outdoor activity such as a mock battlefield experience because of the haze – its not nice. Next year, maybe we will hold a simulated battle in the jungle,” she said.

She praised UKM for hosting the tournament and added that universities are also one of the key partners in efforts to build respect for the law. 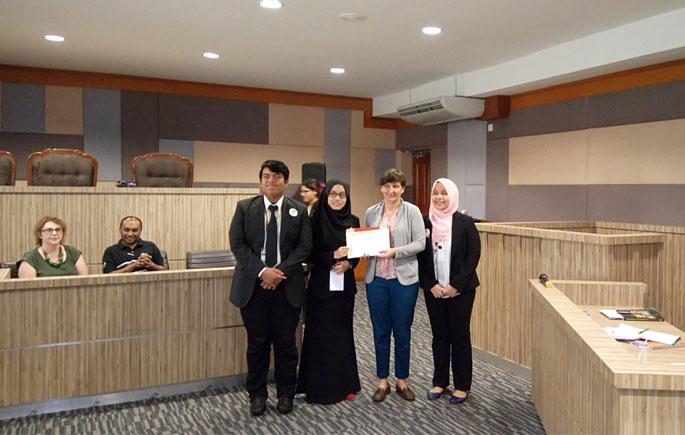 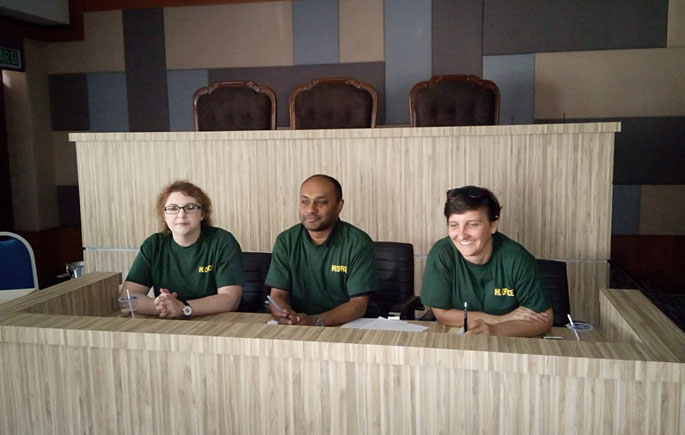 The jurors, l to r, Thynne, Surin Siva and Meytraud 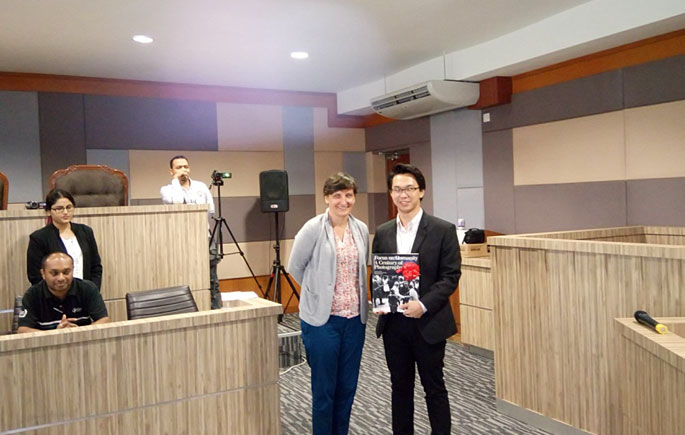