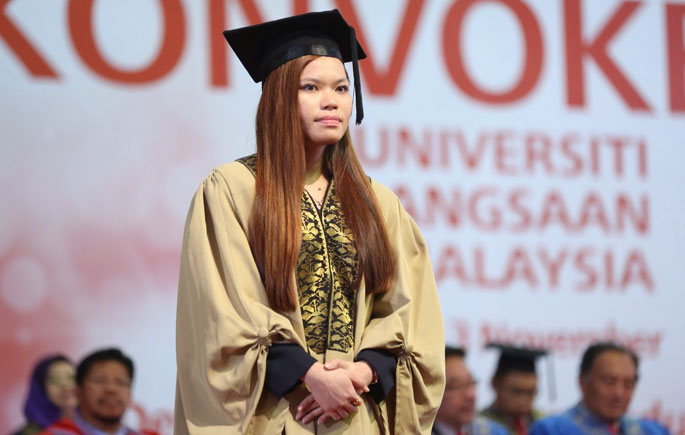 BANGI, 5 November 2015 – Koh Lily, who was honoured with the Vice Chancellor’s Award at the  43rd Convocation ceremony of the National University of Malaysia (UKM) doesn’t mind being employed in a field outside her formal qualification.

Graduating from the Faculty of Engineering and Built Environment, she wouldn’t  impose conditions in choosing a job because for her whatever comes first is the challenge.

“After finishing my studies (Master) I will work in any challenging field, not necessarily engineering.

“Before this, I have worked at CIMB Investment Bank through the Complete Banker’s Programme scheme before I pursued the Master’s Degree,” she said.

She is currently pursuing on a master’s degree in the Industrial Systems Manufacture and Management at the University of Cambridge in Britain since October.

She said during the four years studying at UKM, she not only concentrated on academics, but also took part in co-curriculum activities.

“The stereotype about the ‘bookworm’ doesn’t apply because communication is  important to me,” said Lily who was a UKM debater.

Lily said she chose UKM for her first degree this university not only focuses on academics, but students can also join co-curriculum activities and learn languages to give added value to themselves.

She completed her Bachelor of Mechanical Engineering degree with a CGPA of  3.74.

Meanwhile, the graduate who received the Tun Abdul Razak Award, Nur Yasmin Khairani Zakaria said she sidelined her social media activities to concentrate on her studies when she became busy with assignments and during examinations.

“I’m very addicted to social media. So, I needed to deactivate all my social media accounts. When I received this award, I felt that it was all worth it,” said Yasmin, who graduated with a Bachelor of Education (TESL).

Yasmin said she put education in the top spot and co-curriculum in second place during her studies at UKM.

“I wouldn’t say that co-curriculum is not important because I am  also active in co-curriculum, but please don’t skip the classes because of  co-curriculum. You can skip the co-curriculum to go to lectures ,” said Yasmin, who finished her course  with a  CGPA of  3.71.

Now, the daughter of former teachers from Kelantan is doing her Master of Education (TESL) at UKM. 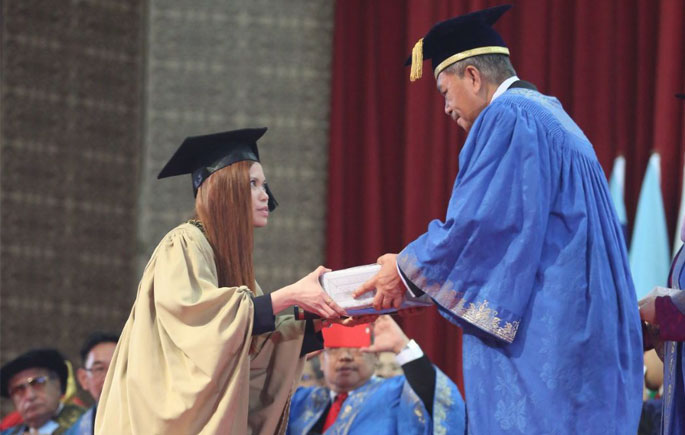