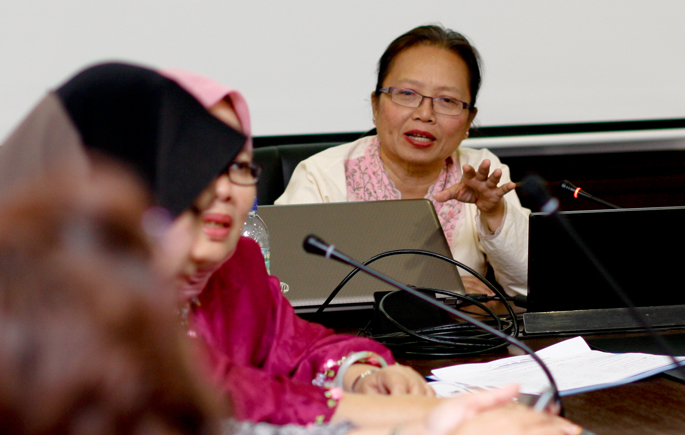 BANGI, 21 January 2015 – Women bore the brunt more than men as victims of the recent floods in the east coast of Peninsular Malaysia last December and this month.

A discourse organised by The National University of Malaysia (UKM) here today on ‘Speaking Without a Sound: The Gender Perspective on Flood Management’ agreed that women suffered more misery because they were neglected and not consulted on how to mitigate the effects of the floods.

Director of the Tun Fatimah Hashim Women’s Leadership Centre Associate Professor Dr Madeline Berma said she found women in general suffered the most from the floods, especially the disabled, the pregnant, nursing mothers and single mothers.

She found the women victims to be the most vulnerable because most of the aid sent to the devastated areas did not reach them first.

“Men were expected to fetch the emergency relief supplies distributed along the main roads, but that did not necessarily mean that their families benefited. Wives and mothers taking care of children had to stay put at home as long as possible to wait for the aid. They were in danger of the rising waters submerging their homes and yet must stay with their children to protect them,” she said.

Those facing the greatest risks were single mothers and ailing women who alone by themselves headed families of small children. There were no husbands or fathers to help them evacuate or fetch relief packages from the authorities and non-governmental organisations (NGO).

“What should have been done was for the aid to go straight to the families as the households are almost always managed by the wives and mothers. They are the ones who know best what is needed the most – whether its food, clothing or medicine. The men-folk would usually be away from their families either taking part in relief work or looking for aid,” Dr Madeline said.

She expressed disappointment that some of the aids were not distributed properly. In Pahang, she saw groups in four-wheeled drives tossing out supplies from the windows or roofs to just about anyone waiting at the road-side as they drove by.

Dr Madeline said she witnessed blatant wastages and was angered by remarks made by those who picked up the packages – mostly young men – of receiving a windfall with some of the goods ending up in sundry shops.

Some of the supplies were wasted while others distributed disproportionately, with some families getting too much clothing but not enough food, while others received too much instant noodles but little else.

The sense of bewilderment and grief was further compounded by the lack of law and order, with looting and pilfering a common sight in the towns. Police stations and multi-purpose halls were inundated so the victims did not know who to turn to.

During the question and answer session, some among the audience blamed the authorities for the lack of coordination of aid distribution with others questioning the sincerity of the public.

“Some people who were not affected, took the aid packages anyway, including medicine and then selling them. Some public agencies also lack integrity,” an activist with the National Council of Women’s Organisation (NCWO) Shanti Dairiam said.

Another activist from an NGO, Women’s Voice, Dato’ Faridah Khalid said generally some among the Malaysian public are not really interested in helping the flood evacuees.

“They used natural disasters like the floods as an opportunity to get rid of unwanted items or junk, like dirty pillows, stained mattresses, old clothing which are only fit to be thrown away and not used at all,” Faridah said.