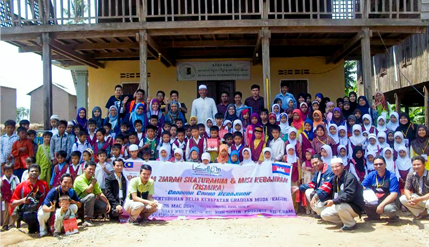 BANGI, 1 Apr 2014 – The Islamic Centre of The National University of Malaysia’s (UKM) along with several youth organisations have successfully carried out a charity programme in Cambodia recently.

Some 25 volunteers consisting of UKM alumni, teachers and students of MARA Junior Science Colleges and representatives of the World Assembly of Muslim Youth (WAMY) of Malaysia carried out various charity works and assistance to the Cam community there.

President of the Young Graduates Cooperation Union (KAGUM) Muhammad Hanapi Jamaluddin said the mission was able to assist the Muslim minority community in two kampungs there who are marginalised and left behind the mainstream development as well as providing pointers on Islamic religious requirements to the villagers.

Two villages, Suay Khleang and Soh Kutin, in the province of Kompong Cam north of the Cambodian capital Pnom Penh were selected for the charity programme.

Muhammad Hanapi said the charity work was aimed at fostering good relationship with the Muslim community there. Despite some constraints due to difficulties in communicating because of the language and dialects differences between Bahasa Melayu dan the Cam language, they got by with the help of the Cams who had studied in Malaysia .

The main goal of the programme is to expose young graduates who are potential leaders in the country to the hardships faced by some communities by contributing their knowledge in various fields while also extending monetary assistance and essential food aid to the Cam people in the two villages.

Various sessions were held between the volunteers and the villagers in the spirit of Islamic brotherhood. The Cam youths were also invited to study in Malaysia.

Muhammad Hanapi said the Malaysian volunteers had also benefitted from the programme through exposure to Cambodia’s historical background, culture, economy, society and religion among others.

The volunteers undertook various activities including Malay language and religious classes, prayer sessions, motivational talks, pointers for SPM/STPM exams and science experiments. They were also shown motivational videos and played games including a soccer match between them and the villagers.

They also undertook various community services including gotong-royong to clean up various areas in the two villages including the mosques and religious schools, the cemeteries, the roads leading into the kampungs and tidied up homes of senior citizens.

The villagers were also given food hampers in the form of essential items including rice, sugar and flour as well as cash assistance to the poor, single mothers, the elderly and the disabled.

A Khleang Suay village elder who was also an iman, expressed gratitude of the villagers to the volunteers for the assistance and help rendered to them.

Muhammad Hanapi said the mission cherished the experience they had gained and was glad of the cooperation rendered to the team.

He hoped similar charity programme would be held from time to time including within Malaysia such as in Sabah and Sarawak.