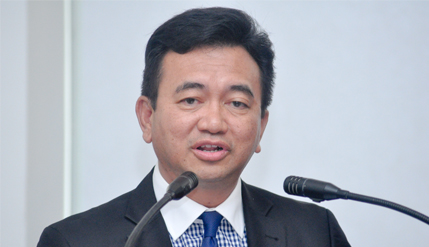 BANGI, 2 Apr 2014 – The various Research and Development Centres of The National University of Malaysia (UKM) around the country should step up their work to fully utilise the facilities made available to them.

Addressing an appreciation ceremony held here today for the launching of the Langkawi Research Centre (PPL), Prof Mazlin gave the example of its Jatropa Research Centre and farm in Kuala Pilah, Negeri Sembilan.

It was set up to produce oil from the jatropa fruit to make fuel for jet aircraft but to date it had only used 10 acres of the 100 acres farm area made available to it.

He had recently visited the Jatropa Centre and farm and found its operations running smoothly. Nevertheless, the plantation has a much higher capacity but is not being fully used.

Likewise the Marine Ecosystem Research Centre (EKOMAR) near Mersing, which had carried out several important studies in the waters around the east coast of Johore but there are still many areas that are yet to be fully explored.

Other sites include the Bangi Permanent Forest Reserve in its Bangi campus, the Fraser’s Hill Research Centre, the Langkawi Geopark and Tasik Chini Research Centre in Pahang which is Malaysia’s second largest freshwater wetland and a UNESCO Biosphere Reserve.

All the research centres have provided invaluable contribution to the academic studies and science, including the PPL and should also inform the local communities their research findings, Prof Mazlin said.

The appreciation ceremony for the PPL launch recalled the moments when the Yang Di-Pertuan Agong Tuanku Abdul Halim Mu’adzam Shah Ibni Sultan Badlishah graced the occasion on Aug 11, last year which coincided with the 3rd of Shawwal Hijrah 1423, the third day of Raya Aidil Fitri.

Professor Datuk Dr Rahmah Mohamad, the Deputy Vice Chancellor (Research and Innovation) then who chaired the PPL official ceremony at that time, described it as one of the high points of her career. She retired on 31 Dis 2013.

She recollected that the centre was renamed the Tuanku Abdul Halim Mu’adzam Shah Campus (KTAHMS) and had then held an open day for local residents to visit and see for themselves the exhibitions on the scientific research carried out there.

Also present at the award ceremony was PPL director Prof Dr Che Aziz Ali, Director of the Institute for Environment and Development (LESTARI) Prof Dr Mohd Raihan Taha and researchers and staff of PPL and LESTARI.

Heads of the various institutes, centres and faculties who contributed to the success of the opening were awarded certificates of recognition, Bonsai plants and souvenirs.