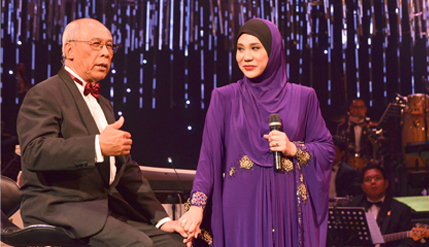 The concert was in appreciation of the services of Datuk Dr Johari Salleh as a leading musical figure of the nation. Johari who is UKM’s Principal Fellow led the orchestra.

Johari showcased his prowess as an arranger interpreting the works of other musicians like P Ramlee, Gus Steyn, Jimmy Boyle and Alfonso Soliano.

Many in the audience were made up of relatives and acquaintances of those artists who became guides or mentors to Johari when he served at RTM beginning in 1961 until 1982.

The concert was also graced by performances of Jimmy Boyle’s son, Jimmy junior and Alfonso Soliano’s daughter Isabella – who played the piano and sang.

Jimmy gave a rendition of a medley of his father’s songs, Putera Putri and Jauh jauh while Isabella Soliano gave her jazz interpretations of some local standards.

The concert received overwhelming response from local jazz, ‘standards’ and ‘pop’ fans, prompting Johari to give an ‘encore’ performance in appreciation of the audience.

The Singapore-born composer is a musical legend in Malaysia. He has vast experience in composing, arranging and conducting while also mentoring budding young musicians.