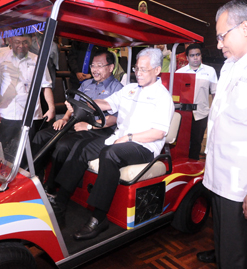 The vehicle a golf buggy is powered by a fuel cell engine using a system known as a Proton Exchange Membrane (PEM) Fuel Cell/Supercapacitor Hybrid Power. It was conceived and produced by UKM’s Fuel Cell Institute

The electrical power is produced by a stack of fuel cells generated by electrochemical reaction between hydrogen and oxygen from the air at low temperatures that produces water as a by-product. Fuel cell vehicles thus have zero emission and are clean, green, environmentally friendly and sustainable.

Prof Wan Ramli said the buggy’s motor has a higher energy efficiency than conventional car engines at 50% compared to 30% for the conventional engine. It is small, easy to manufacture and weighs only 25% of the weight of the replaced battery using just 75% the space.

UKM was given the mandate by the Education Ministry to lead the project to develop a zero emission vehicle using indigenous fuel cells with a grant of RM7 million for 3 years.

The launch was part of the 5th series of media conference and exhibition on the achievements and success of Malaysia’s research universities hosted this time by UKM.

Prof Wan Ramli said leading car makers like Toyota, Honda, Nissan, Ford, Renault and GM will be rolling out commercial fuel cell vehicles in 2015 in markets that already have hydrogen supply infrastructure such as Japan and Germany and other European and American cities including Los Angeles.

He expects a fuel cell car prototype will be built by 2016 with the cooperation of other Malaysian universities and Malaysian automotive companies.