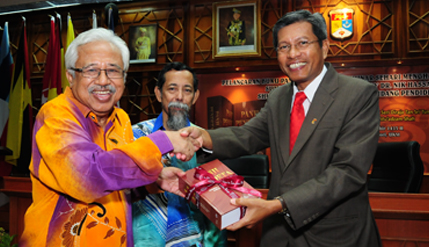 BANGI , Feb 20 2014 – The contributions of archaeologist  Emeritus Prof Dato’ Dr Nik Hassan Shuhaimi Nik Abdul Rahman to education has become a source of inspiration to a new generation of researchers and academics of Malay history at the National University of Malaysia (UKM).

Launching the book “Panji Pendeta” and a one-day seminar in appreciation of Prof Dato’ Nik Hassan’s 50 years of contributions in education, sponsored by the Institute of the Malay World and civilization (ATMA) here today, she said Prof Dato’ Nik Hassan who was interested in Malay education wrote many articles in journals about its impact on moden Malaysian history .

Prof Dato’ Nik Hassan was the Principal Research Fellow at ATMA and had authored over 150 articles in various journals at the national and international levels while also publishing more than 50 books related to archaeological and historical research.

He received the 2011 Malaysian Historic Society award and again in 2012 in appreciation of his devotion to Malay historical research in particular and Malaysian history in general.

He was also president of the Malaysian Archaeological Association (Ikatan) for 25 years .

His latest project was the pre-historic human dig site in the mangrove forest on the island of Kalumpang, Kuala Gula, Perak.