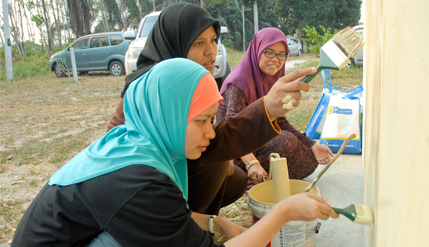 DENGKIL, SELANGOR, 19 Feb 2014 – A group of 12 post graduate students of the Psychology and Human Development Centre of the Faculty of Social Sciences and Humanities of The National University of Malaysia (UKM) have taken it upon themselves to help alleviate hardships suffered by a destitute family in Kampung Jenderam Hilir, Dengkel near here.

The family of Encik Nordin Narit have been facing hardships following the death of his wife last Aug.

Though suffering from bone infections he has to fend for his three young sons aged 11, 8 and 6 by himself to the extent that he could not get a job.

The problem was compounded by his youngest son who is suffering from a heart complication and eye ailment as well as being an epileptic thus needing Nordin to spend a lot of time looking after the six year old boy.

The high cost of health and medical care has brought about further hardships to the family.

Nordin and his family’s predicament came to the attention of the 12 students who resolved to help them by carrying out a donation drive in UKM and undertaking gotong royong to improve facilities at Nordin’s house with the assistance of the Development and Maintenance Department of UKM.

Their concern and efforts got the attention of TV3 which aired Nordin’s problems in its Bersamamu programme which drew attention of other government agencies.