UKM Needed To Be Conscience Of The Nation 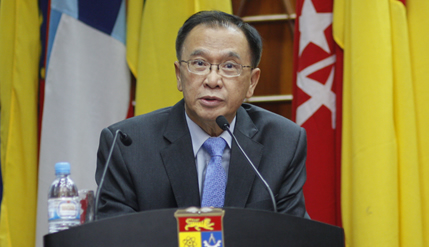 BANGI, Feb 21 2014 – The National University of Malaysia (UKM) should be the conscience of the nation through the activities of its social science researchers and its Faculty of Social Sciences and Humanities (FSSK).

Chairman of the UKM Board of Directors, Emeritus Prof Dato’ Ir Dr Mohamad Zawawi Ismail suggested that such studies emphasise more local content such as the works by renowned sociologist, the late Prof Syed Hussein Al-Attas .

He was launching the Malaysian Social Science discussions and books in appreciation of the contributions of IKMAS Principal Fellow Emeritus Prof Dato’ Dr Abdul Rahman Embong in the development of Malaysian social science and sociology here today.

Prof Zawawi said social science research in Malaysia should be reviewed and become more open due to the changes in social structure since the colonial era.

He felt that social science research was being carried out in the western mould saying that there should be more academic freedom in social sciences as there had been in the 1960s.

The appreciation ceremony, Social Science and Development Studies: A Tribute to Professor Abdul Rahman Embong, was  organised by IKMAS and the Malaysian Social Science Association (PSSM) here today on his 70th birthday.

Prof Abdul Rahman had served as president of the PSSM and is now a special advisor to the organisation.

One of the books is the work of former post-graduate students who were supervised by Prof Rahman and those who followed his lectures at IKMAS either formally or informally.

The Council also launched his book Literature, Politics and Society, which is an anthology of essays written from the 1960s until the 2000s.

Distinguished Prof Datuk Dr Shamsul Amri Baharuddin delivered the keynote address raising the question of the direction social sciences is heading in the country in the context of history and current challenges.