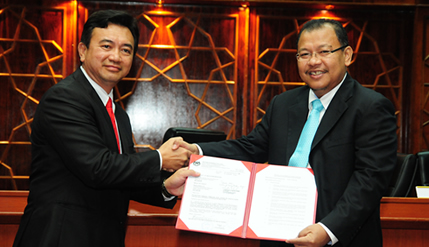 BANGI, 16 Jan 2014 – Director and Principal Fellow of the  Institute of Environment and Development (Lestari), Prof Dr Mazlin Mokhtar has been appointed the new Deputy Vice Chancellor (Research and Innovation Affairs) of The National University of Malaysia (UKM) for a three-year term from today.

He took over from Prof Dato’ Dr Rahmah Mohamed whose tenure ended today. His appointment was announced by Vice-Chancellor Prof Datuk Dr Noor Azlan Ghazali at a brief submission and acceptance of duties ceremony here today.

Prof Mazlin in his acceptance speech, said formidable challenges lay ahead for UKM along with the other research universities because each institution would only receive RM50 million a year for research from the Education Ministry.

This is a reduction of more than 50% compared to the RM110 million it received in the previous year.

However, he expressed confidence that under Prof Noor Azlan’s leadership, UKM will find ways of seeking supplementary funding through interaction with other universities and increased participation of the private sector.

Describing the budget cuts as an opportunity to innovate, he pledged to do his best to help overcome the shortfall and asked the research institutes to come up with ways to save costs.

Prof Mazlin is a professor of Environmental Chemistry and had been with the faculty of Science and Technology since 1997.

Prof Mazlin’s research group project on Chemicals management System for Malaysia under the sponsorship of the Ministry of Higher Education was awarded the best for the category of social sciences and humanities 2006-2008 at the national level.

He has been awarded various international fellowships and invitations as visiting professor at IAEA-Monaco, UNRI-Indonesia, Kyoto University and United Nations University, Japan.

Prof Mazlin has published more 130 articles on environmental chemistry and related areas. He is the founding chairman of the Malaysian Network for Integrated Management of Chemicals and Hazardous Substances for Environment and Development (MyNICHE).

He also chaired the Working Group Partnership on biodiversity and environmental management consisting BP (Malaysia), NRE, WWF, ISIS, British Council, etc since 1999. He is also a member of the Advisory Committee of Environmental Health Research Centre, Institute for Medical Research, Ministry of Health and a member of the National Steering Committee for United Nations Develoment Programme (UNDP) Small Grants Programme.