UKM Asked To Set Up Bahasa Melayu Courses In Uzbekistan 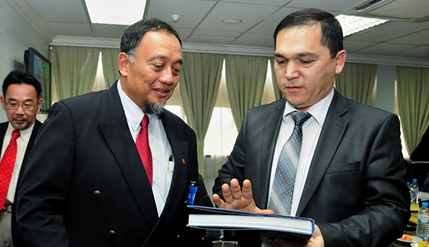 BANGI, 21 Jan 2014 – The National University of Malaysia (UKM) may set up Bahasa Melayu courses in universities of the Central Asian republic of Uzbekistan.

The request came from Uzbekistan’s Deputy Minister of Higher and Secondary Special Education, Botir Usmanov while on a short visit to UKM today.

Usmanov said universities in his country are interested in implementing various language courses in order to diversify their higher education programme.

He said Uzbekistan is looking beyond Russian, English and other European languages because of the increasing importance of trade with South-East Asian nations.

In his welcoming address, Prof Noor Azlan predicted that education cooperation between the two nations would strengthen, particularly with UKM.

Prof Ir Riza, in his briefing to the visiting delegation, gave a similar positive outlook on the possibility of UKM’s role in helping universities in Uzbekistan.

Malaysia and Uzbekistan had signed an inter-governmental memorandum of cooperation on education.

Malaysia and Uzbekistan established diplomatic relations in 1992 with Malaysia opening its embassy in Tashkent in 1993. Since 1992, the President of Uzbekistan, Islam Karimov has made several visits to Southeast Asian countries such as Malaysia and Indonesia which were part of his longest trip abroad.

They are also developing ties in economic and investment cooperation, oil and gas and tourism.