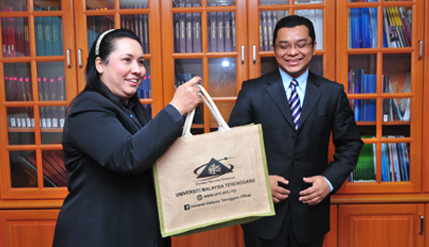 BANGI, 29 Jan 2014 – The Strategic Communications Centre of Universiti Malaysia Terengganu (UMT) hopes to learn from the experiences of its counterpart at the National University of Malaysia (UKM) in implementing public relations activities to build up the image of the young institution.

Its Director Zukiferee Ibrahim said as UMT is relatively new, the university needs to create a higher public profile through the mainstream media.

He made the request during a fact-finding visit to the PKK office here today, where he was briefed on its background and function by its Director Assoc Prof Dr Norzalita Abdul Aziz and Deputy Director (Admin) Abd Razak Hussin.

Zukiferee said as UMT, which was established in 2007, is located in the comparatively rural backwater of Kuala Terengganu and thus does not receive as much attention from the media as institutions in Kuala Lumpur and Selangor.

However since 2013, UMT had opened its strategic communications centre in Putrajaya for the sole purpose of building up its image in the nation’s capital where it is closer to the major media organisations.

Dr Norzalita said PKK was ready to give advice on such matters adding that all public universities should help each other out through smart partnerships rather than to compete for publicity through the mainstream media.

She proposed that since UMT has a public relations team stationed in the Klang Valley, it should try to build up rapport with the editorial management of the newspapers and television statons.

Abdul Razak advised Zukiferee to set up a bilingual UMT News portal so that the public and mainstream media can get to know the happenings at its campus in Kuala Terengganu.

Zukiferee agreed that there were important events happening at UMT that received scant publicity recently because the university is far from the centre of power.

At present, the UMT public relations arm in Putrajaya is quite small with only six staff members including a driver.

Zukiferee said he came with five staff members to visit PKK and there was only one left holding the fort back at Putrajaya.

He also acknowledged that it needs to have officers and communicators who can speak and write well in English.