Affirmative Actions Have Not Benefitted Target Group Says US Anthropologist 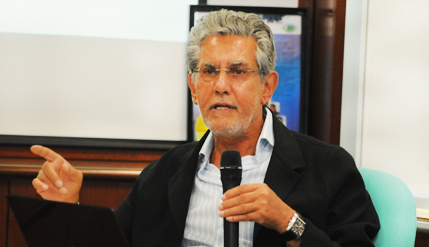 BANGI, 25 June 2014 – Affirmative action programmes may have noble intentions, but are usually abused by certain vested interests to the extent of not benefitting the targeted group.

Unfortunately those programmes do not work as expected because the monetary benefits usually flow to a relatively few well-connected people.

He was giving a lecture on Social Inequality: A Multicentric Approach at the Institute of Malaysian and International Studies (IKMAS) of The National University of Malaysia (UKM) here last week.

Prof Pieterse had studied affirmative programmes in India and South Africa and saw some irregularities there that raised questions about their effectiveness.

Based on his studies, he said such programmes have not eradicated inequality mainly because of the built-in social class systems and culture, such as titles and privileges and not due to lack of money.

Benefits from the affirmative action are often abused and do not necessarily assist the intended recipients because of favouritism and nepotism.

He said in India there are numerous affirmative programmes for the lower castes in relation to getting education and jobs as well as getting loans for business,. But the programmes have increasingly been seen as an entitlement that is demanded above merit.

Because of that those in the higher castes who qualify by merit because they do not have the means and yet rejected became dissatisfied and resentful.

There were even cases of people from the upper classes who were poor and suitably qualified but claimed to be from the lower classes so as to be selected. This caused the real lower caste people to feel cheated and the ramifications extended to politics. The lesson here is that poverty and inequality are not necessarily the same, he said.

He recalled problems in South Africa where corruption is endemic due to the so-called “Black Empowerment” programme implemented after the end of white-minority apartheid rule in 1992.

That had created a class of rent-seekers usually people from a few tribes linked to the ruling African National Congress (ANC) or to the President. The problem is causing so much anger that even President Jacob Zuma was accused of personally being corrupt.

When asked about Malaysia, Prof Pieterse said the trends looked similar but declined to elaborate as he was still studying the New Economic Policy. “The NEP has not lifted inequality,” was his only remark.

Even in America the so-called “American Dream” remains a dream to a lot of people, he said. Many rich people got richer while there are also a rising number of the poor getting even poorer.

This can be traced to the basic structure of English-speaking United States, with inherent inequality in the Anglo-Saxon capitalist system.

Prof Pieterse believed that American capitalism has many anomalies to the extent that it cannot be a model for other countries.

Nevertheless, he also believed that globalisation has reduced global inequality. “Alleviation of poverty is a tremendous challenge for the global community. Although everyone agrees on the goal of poverty reduction, policies often remain controversial or ineffective and there is an urgent need to reconsider the causes and remedies of poverty.”

Jan Nederveen Pieterse is Mellichamp Professor in Global Studies and Sociology at the UC Santa Barbara. He specialises in globalisation, development studies and cultural studies. He also works part time as professor in globalisation at the University of Maastricht in the Netherlands.

His recent published books are: Is there hope for Uncle Sam? Beyond the American bubble (2008); Ethnicities and Global Multiculture: Pants for an Octopus (2007) and Development Theory: Deconstructions/ Reconstructions (2001; second edition 2009).