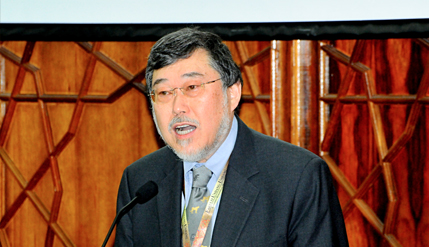 BANGI, 6 June 2014 – Law students no matter where they studied the discipline needed to find some common grounds and common basis with regard to the rule of law so as to be prepared for the real world.

President of the International Association of Law Schools (IALS) Prof Francis S L Wong said challenges of legal education is to find a common basis that all their students can hold on to and understand the rule of law no matter where they studied.

Speaking at the 3rd Annual Asia-Pacific Law Dean’s Forum 2014 hosted by the Law Faculty of The National University of Malaysia (UKM) here last week, he said students may study in different countries with different styles of teaching, in different languages with different political and economic systems as well as different customs and beliefs, but the rule of law will always exist.

A commonality must be present to enable them to work within the framework of the law, Prof Wong said.

IALS has 185 members in over 50 countries representing over 6,000 faculty members around the globe, including Malaysia. The conference was opened by Vice Chancellor Prof Datuk Noor Azlan Ghazali.

Using the analogy that the Law is the 21st century religion, because law was what most people really believe in and what lectures and professors of law teach their students to believe and have faith in.

Explaining that he was not advocating that all laws for every country be uniform devoid of religion or custom but was suggesting that there should be a commonality in the approach to law.

The laws remain different and diverse according to country, custom and religion but the way the students and the legal profession approach each of those separate laws should be the same, thus making it the commonality that is needed.

“I have a colleague, who said to me during the first Law Dean Forum that she lectures on Syariah Family law, so she tells her students, when they deal with Syariah Law, they must approach it from a Religious point of view not a civil one.

“So, I have taken that to heart and I think what we should do is tell our students to approach any issue that they will be confronting from a legal point of view,” Prof Wong said.

That, he said, could be the first step towards having a more common ground for all law students. The next step would be to engage in the other stakeholders in law such as the Judiciary and the Professional Bar Council.

He added that international and global bridges needed to be built and ties must be made to the professionals of law to make them understand the challenges and obstacles that are faced by law lecturers in preparing the students to be a part of the legal system.

Prof Wong said that as a body of professionals who teach law they should be allowed to govern themselves. Unfortunately almost all Faculties of Law around the world are governed by the Judiciary or the Ministry of Education or by the BAR Association.

“We do have some input, but we do not have our own voice. We need to be more proactive and make our own narrative. Instead of being reactive to certain issues when they come along, we should be more proactive, and that is what these sessions are all about. To reach out to law school leaders throughout the world, so that we can start to develop our own narrative and our own set of criteria,” Prof Wong said.