UKM To Undertake Research Into Biogas Production At Tasik Chini 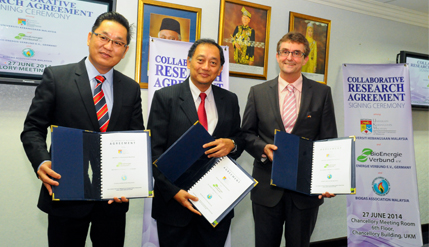 BANGI, 27 June 2014 – The National University of Malaysia (UKM) is to undertake research into biogas production at its Tasik Chini Research Centre (PPTC) with Bio Energie Verbund  E.V. of Germany and the Biogas Association of Malaysia.

It signed a Collaborative Research Agreement with the two organisations here today to develop ways to exploit the enormous resources of biomass found at Tasik Chini.

Under a long-term research grant scheme from the Ministry of Science, Technology and Innovation in 2011, PPTC found Tasik Chini held enormous reserves of organic biomass and wastes that could be turned into biogas.

Since then, PPTC had been looking for partners to do follow-up research and found the two parties were willing to assist in the venture.

Tasik Chini, a UNESCO Biosphere Reserve status site in Malaysia, covers an area of some 5,000 hectares with abundant organic wastes, mostly oil palm effluents from processing plants nearby, animal feed wastes and debris from logging. Such disposable materials could be the raw materials for the production of biogas if the processing could be done economically.

Bio Energie Verbund E.V. is an association of small and medium-based industries subsidised by the German Ministry of Economy aimed at rationalising the use of biomass and encouraging consumers to use biogas.

Luschnig said when the agency was formed in 1998, few Germans were interested in renewable energy sources. Nonetheless it drew sufficient attention for 98 small firms to pool their resources to undertake alternative energy production.

He said the recent downturn in the German solar energy panel market due to cheap imports from China had made biomass and biogas a more viable option. Biogas is important in Germany now as it produces 21% of electricity in the country from some 18,000 biogas plants.

The Biogas Association of Malaysia is an association which had introduced sustainable methods of waste disposal by using anaerobic digestive technology to achieve zero waste while producing renewable energy as well as fertilizer.

Tan said unlike fossil-based fuels, biogas is recoverable and can be used again and again, which is what all three partners hope to do.