A Floating Nuclear Plant For Malaysia? 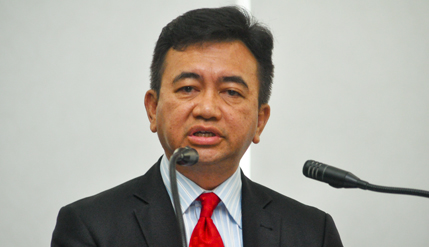 BANGI, 17 Mar 2014 – A floating nuclear plant for Malaysia? That was the suggestion made by The National University of Malaysia’s (UKM) Deputy Vice-Chancellor (Research and Innovation) Prof Datuk Dr Mazlin Mokhtar to local nuclear scientists.

Prof Mazlin urged them to adapt nuclear plant design that takes into account the common natural calamities such as floods, landslides and earth tremors that occur in Malaysia.

Opening a five-day International Nuclear Plant Design and Management course here today, he said although Malaysia is not in an earthquake zone, it does register seismic activity whenever neighbouring countries are struck by tremors.

The course is jointly organised by UKM and Universiti Tenaga Nasional (UNITEN) and sponsored by Hitachi-General Electric and Tokyo Institute of Technology (Tokyo-Tech).

The former Director of UKM’s Institute of Environment and Development (Lestari) said the country’s nuclear programme should be prepared for any on-site nuclear accidents and mitigate the aftermath of a disaster.

“I advised my students to take into consideration the consequences of natural disasters when they may be called upon to design. Maybe a floating nuclear plant? After all, the Kansai airport (near Osaka, Japan) is a floating airport. We must be prepared for change,” he said.

Prof Mazlin said he personally experienced the Fukushima earthquake of March 2011 in Japan and had since always made it a point to emphasise safety for a nuclear plant.

“I can still remember when the Fukushima earthquake and nuclear disaster occurred almost exactly 3 years ago. I was at the United Nations University in Tokyo, on the 5th floor and had just completed a lecture. We were escorted outside of the building. After 4 to 5 days there were still aftershocks,” he recounted.

What impressed him most about the Japanese was the resilience and the discipline despite the Fukushima plant disaster which was 300 km from Tokyo.

He had also then stayed on the 28th floor of the nearby hotel, and it remained safe.

Prof Mazlin appealed to policy makers and scientists alike to put the welfare of the rakyat first when choosing a site for a nuclear reactor.

He said they owed it to the ordinary people to make them feel reassured about having something new nearby that could change their lives forever.

“We must respect the Malaysian community. Consult the community, who have become empowered with knowledge. So we must respect them. So when we design today we must be transparent in designing something quite controversial like a nuclear power plant,” he said.

He said when Malaysia goes nuclear, we also have to abide by international conventions with very high standards of safety and monitoring.

Some fifty nuclear scientists from UKM, UNITEN and Japan are taking part in the biennial course hosted in turn by the Malaysian and Japanese universities.