Increasing Trade Relations Between Venezuela And East Asia Including Malaysia 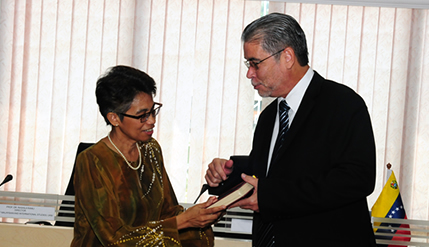 BANGI, 27 Feb 2014 – Venezuela’s trade with East Asia, including Malaysia, is rising faster than with either The United States or Europe.

This is because of policies that acknowledge East Asia as the fastest economic growth region, said Venezuela’s ambassador to Malaysia Manuel Antonio Guzman Hernandez.

Speaking at a discourse on South-South cooperation from the Venezuelan point of view at The National University of Malaysia (UKM) today, Hernandez said a wide range of commercial links had been established with East Asia since the late Hugo Chavez became president in the 1990s.

The discourse was organised by the Institute of Malaysian and International Studies and the Venezuelan embassy in Kuala Lumpur.

Describing the trade links with China and the ASEAN nations as encouraging, Hernandez said that paved the way for other Latin American countries to explore Asia as a new place to do business.

He said Chavez had sensed that East Asian nations would be fair and equitable in trade without having to politicise commercial relations.

The Venezuellan Deputy Chief of Mission Enrique Gonzalez Kong said in his talk that China is Venezuela’s most important trading partner, in which commerce between the two countries had risen by 300 percent in just over 10 years.

Kong said President Chazez had been far-sighted enough to see the growing power of China worldwide at a time when most latin American states preferred to look towards America and Europe.

President Chavez first visited Malaysia in 1999 and again in August of 2006 to discuss investments in Malaysia’s palm oil industry and to diversify Venezuela’s energy industry.

Malaysia and Venezuela, two oil producing countries, also signed an agreement on avoidance of double taxation in 2006 when Chavez visited Kuala Lumpur for the second time.