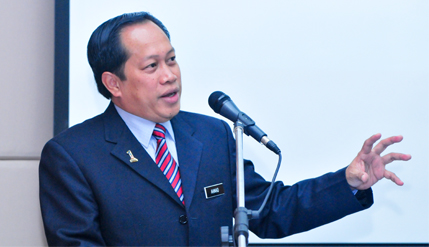 BANGI, 7 Mar 2014 – Student entrepreneurs eager to produce advanced animation films have been urged to take advantage of the loan facility of the Graduate Entrepreneur Fund of which  RM16 million is already being made available.

That amount is part of the original RM50 million allocated when it was launched by the government earlier this year.

Deputy Finance Minister Datuk Hj Ahmad Maslan said multimedia students from The National  University of Malaysia (UKM) and other universities can apply through the SME bank and ask for a Creative Multimedia loan from the fund.

Speaking when launching the Creative Multimedia Competition organised by students of UKM’s Faculty of Technology and Information Sciences (FTSM), Ahmad Maslan said student entrepreneurs below 40 are eligible to apply for up to RM500,000.

They only need to convince the bank that their business model is viable.

Ahmad Maslan said multimedia entertainment can generate good income if the content has a story-line that can attract an international audience .

He was, however, disappointed that apart from local animation films like ‘Upin’ and ‘Ipin’ which are popular in Malaysia and Indonesia , no local multimedia productions have actually penetrated the international market .

There is also not much local animation shows available on satellite channels in Malaysia and even if there are they are not as good as the imported ones.

Malaysia must also produce creative works that are affordable, he said.