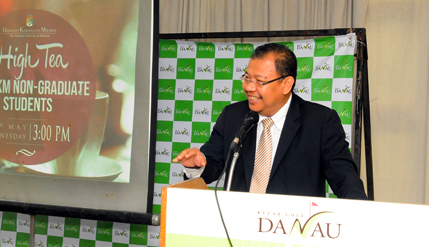 BANGI, 16 May 2014 – Exchange students from six countries who will be completing their one semester of studies in various faculties at The National University of Malaysia (UKM) soon have been invited to come back and do their post graduate studies at the university.

The 43 students from The Netherlands, Japan, Brunei, Thailand, Germany and Kazakhstan here on an exchange programme were feted by the Centre of International Relations (PHA) to a high tea at the Danau Golf Club in the campus here. Their three months stay will end in a few weeks.

Vice Chancellor Prof Datuk Dr Noor Azlan Ghazali while thanking them for choosing UKM to undergo the exchange programme said it has given them the chance to see the world through the eyes of another culture while helping to broaden their horizons.

This was one of the many reasons why many higher education institutions around the world encourage such student exchange programmes.

Dr Noor Azlan touched briefly on how UKM came into being through the will and aspirations of the people who felt the need for a university that could help meet their needs and aspirations following independence.

He said many Malays had donated money to help set it up with the women selling their jewelleries and some men selling off their lands to help raise money to start the university. It has thus rightly become an institution built by the people, for the people and to serve the people.

Timothy Holten, a student from the Netherlands, speaking on behalf of the students recalled his experiences in UKM and in Malaysia. The students were given two choices either to study in UKM in Selangor or University Sains Malaysia (USM) in Penang. He had chosen UKM for the programme as it was closer to KL, where he had stayed a few years ago.

“We get to see who we are and how we truly behave as a person when we see it through another person’s culture. Malaysian students are more reserved, shy and polite, there are physical barriers when you speak, especially between male and female students”.

The Malaysian students, he said, are more guarded and indirect. “So we had to adapt to that and understand that it was part of the culture in Malaysia,” Timothy said.

Juwairiyah Sariffudin from University Brunei Darussalam also volunteered to tell her experiences saying that although Brunei and its people are no strangers to Malaysia, there are still many differences between them.

She spoke of new friends she made from all walks of life and of different races and religions that would be hard to find anywhere else. The multicultural and multiracial backdrop of Malaysia allows everyone to coexist, live and interact together.

“I get to study and experience life and learn more about myself and that has made me more independent and mature even though we have only been here for three months” Juwairiyah said.