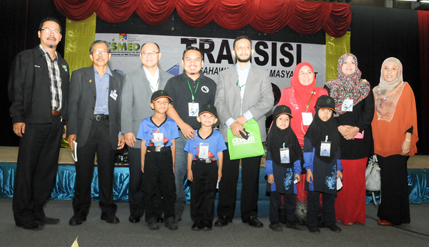 BANGI, 2 May 2014 – Two self-made millionaires today shared the secrets of their successes in business that has been immune to crisis and economic storms to students of The National University of Malaysia (UKM) here.

Saiful Nang from Saiful Nang Academy and Dato’ Capt Jaffar Lamri from the CME Group gave their experiences to over 3000 students and how they tackled hardships and challenges they faced in their endeavours that ultimately brought them the success that they strived for.

Capt Jaffar is a qualified mariner who has worked for a Fortune 500 company before he decided to be an entrepreneur when he bought an ailing marine company and turned it around into a million dollar business in just one year.

He said everyone should cultivate the habit of giving from the very beginning and not just when rich and successful as the more you give the more you get.

He has experienced working life both as an employee and as an entrepreneur. An employee has a limit as to how much he can contribute to society no matter how good he is. An employee tend to worry about his own survival while shouldering the responsibility of providing for his family and good education for his children.

He encouraged students to use their time in UKM to gather as much knowledge and skills as possible so that when they graduate they need not look for a job but instead create their own income.

Jaffar applied the concept of rewarding his employees in his company where he shares profits with his project managers and other key movers in the company. He even open new businesses for them.

One interesting aspect of his management style is not merely rewarding his company’s top performers but also personally searched for the non performing workers to be groomed into highly successful business managers. They would then be made partners instead of just being employees.

Saiful Nang who is from a poor family is now a well-known photographer to royalties and celebrities.

He was dyslexic as a child so he could only begin to read and speak properly at the age of 7. Due to his condition he was ostracised by other children and even labelled as the ‘stupid kid’ in the village.

That was actually a blessing for him because though he cannot mix with the intelligent children he was able to observe them.

“So I got to see the whole picture and know what their interests are. I got a bird’s eye view of what their problems and wants are. What they really need is a place to act their imaginations”

So armed with that knowledge he built a small zoo and amusement park and an underground secret chamber and charged the normal kids for entry.

“That is the day I can never forget. If those children are so intelligent why do they have to pay me to have a good time?”

From then on he has been using his creativity to make money to this very day.

He gave a solution to the biggest problem facing youth that is preventing them from starting a business; the lack of funding.

He said the problem exist because of perception. He said there are too many entrepreneurs who would rather be satisfied with a cupcake instead of sharing a huge pie with others. The concept of sharing puts them off even when it will actually give them a higher return.

Saiful said to be a successful entrepreneur he must know that it is not just about making money but it’s about making others rich as well. Funding, he said is not a problem when a person is sincere in helping others thereby able to make others see the benefits they will gain through a partnership.

This is smart partnership which is advocated in Islam through the concept of Waqaf.

It was with the same concept that he and his partners co-founded Pertubuhan Kebajikan Rumah Pengasih Warga Prihatinan orphanage and home for the disadvantage.

Centre for Entrepreneurial and SME Development (CESMED) Coordinator, Dr. Ibrahim Mohamed, Lecturers and students were among those who attended the talk.