Malaysia Needed To Be At Forefront In Space Technology 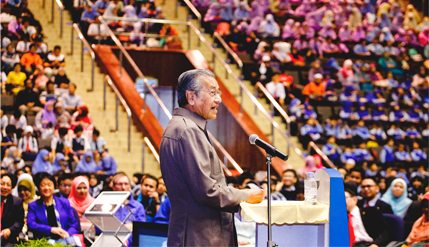 BANGI, 21 October 2014 – Malaysia should strive to be at the forefront of space technology so that it can chart its own destiny on its own terms.

Former Prime Minister, Tun Dr Mahathir Mohamad, said Malaysia needed to go further than just space travel for if we do not step up in the area, we will forever be a passenger in anything we do.

That means somebody else will be in the driving seat and decide the destination and the extent of our participation, he said at The National University of Malaysia (UKM) Space Day today. It was held to give exposure to youth on opportunities in space science.

Among the activities carried out was a dialogue session between students and the group of astronauts, a rocket building workshop, flight simulations and exhibition.

Addressing the audience which comprises of students nationwide, he said the starting point of determining our own destiny is to have the right knowledge. And most of the knowledge today comes from the western world.

He said knowledge of science and mathematics is also key to space ventures. Only with advance mathematics can the landing of a space ship be timed to mere fraction of a second

He believes that being proficient in other languages is also paramount. Most of the research findings are in English and if we wait for it to be translated into bahasa Malaysia, it will be too late to take advantage of it.

At a press conference later he was asked about space travel and accusations by critics that it was a waste of resources.

He responded pointing to Sheikh Muzaphar, whom he said actually got to go for free. Malaysia did not pay anything as it was an offset for the purchase of Sukhoi fighter jets from Russia.

He said many Malaysians do not realise that Sheikh Muzaphar went up there to do invaluable research on cancer cells and microbes but people do not understand that.