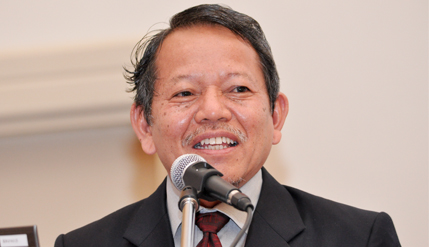 GONG BADAK, TERENGGANU, 19 October 2014 – Malaysia has to improve its productivity and do more than merely becoming a high-income nation after the year 2020.

Executive Director of the Malaysian Institute of Economic Research (MIER) Professor Dr Zakariah Abdul Rashid said what will happen after 2020 is even more important as the country has yet to reach the developed nation status after being stuck in the middle-income trap for over thirty years.

Delivering his keynote address at the close of the three-day Ninth National Conference on Malaysian Economy (PERKEM) 2014 here today, he said growth is too slow for Gross Domestic Product (GDP) to reach high-income status.

“Malaysia is still classified as higher middle-income nation. According to the  IMF (International Monetary Fund) there are still many countries in this situation from the GDP per capita perspective. The bottom line is productivity,” he said.

Prof Zakariah, who will be conferred as Professor Emeritus by Universiti Putra Malaysia (UPM) at its 38th convocation in early November, said Malaysia’s productivity is still low compared to the developed countries.

Economic growth doesn’t necessarily mean high-income or advancing into a developed nation status because a country can have high growth and yet still be poor because competitiveness is lagging.

There may be rising GDP and rising incomes but the standard of living doesn’t rise because the cost of living is climbing faster, which is what is happening in Malaysia.

“We are competitive when the (monetary) exchange rate is changed, which can be manipulated to look good. For me, a more relevant measure of competitiveness is productivity,” he stressed.

Malaysia maybe able to achieve the status of a high-income nation depending on which parameters are used to measure economic growth.

If the nation’s income distribution is measured using Gini Coefficient, it would show that there is still high inequality. Income distribution at 0.46 is not well distributed because there are still gaps between income levels of ethnic groups, urban and rural areas as well as income groups.

The Gini coefficient (also known as the Gini index or Gini ratio) is a measure of statistical dispersion intended to represent the income distribution of a nation’s residents. This is the most commonly used measure of inequality.

Using GDP as prescribed by the IMF only shows total output of a nation but not the overall standard of living or cost of living.

Prof Zakariah said there are also factors in the economy that needed to be dealt with. “There is more to being a developed nation than just higher income,” he added.

PERKEM is an annual event organised by the Faculty of Economics and Management (FEP) and hosted by the different states. The conference provides a platform for researchers, policy makers and those who follow Malaysia’s economic development through the presentation of research findings that focussed on various issues pertaining to economic development, growth and business environment.