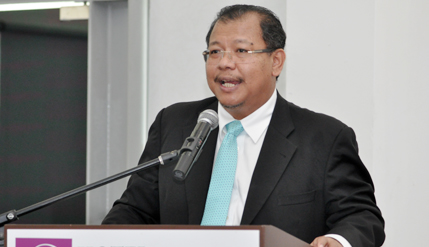 BANGI, 21 October 2014 – The first batch of graduates from The National University of Malaysia (UKM) in 1973 were reunited at a get together in Puri Pujangga Hotel in the UKM campus here today.

The gathering is also to appreciate their contributions to the country. Though only 44 out of the 167 who graduated then were able to attend it was both emotional and inspiring to see them reminisce about the good old days.

Many were in their 60s and still active as professors, members of boards of directors of various corporate entities, retired politicians and teachers.

They are mostly not just anybody for behind the mask of ordinary men and women they have contributed immensely to the country and are truly guardians of the nation.

The Vice-Chancellor Prof Datuk Dr Noor Azlan Ghazali said he was honoured to be in the same room with such personalities saying that UKM wanted to be involved in its alumni so the university can be more effective and able to reach greater heights.

Alumni’s involvement is a practice successfully shown by renowned universities like Cambridge, Oxford, Harvard, Virginia and other outstanding world universities.

He thanked the Centre of Student Development and Alumni Relations (PMPA) for its initiative in organizing the gathering.