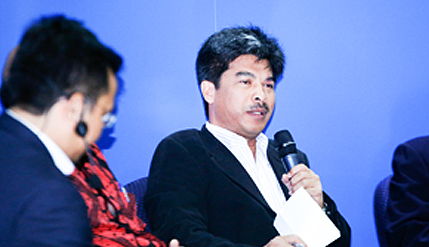 BANGI 19 September 2014 – The government of Ukraine should at the very least be made accountable for negligence and failure to ensure the right of safe passage of commercial flights over its air space resulting in the gunning down of MAS flight MH17.

This is the view of an international law expert from The National University of Malaysia (UKM) Dr Sufian Jusoh at a forum, The PERSADA Discourse on the tragedy, in the campus here today to discuss the next course of action needed to be taken.

Dr Sufian said holding Ukraine accountable is one of the legal recourse available. But justice will only be served when the real perpetrators are brought to justice though he conceded that it is easier said than done.

Dr Sufian suggested the establishment of a special court at the international level to hear charges against the perpetrators.

Associate Professor Dr D Ravichandran K Dhashinamooty an expert on strategy and diplomacy from the Faculty of Social Science and Humanities agreed that a special court should be established to get justice.

He said even when the perpetrators are identified, there is risk that justice will not be served as when it comes to international law political interests will come into play and the culprits may get a favorable ruling because of their close ties to Europe.

He said the government has been able to diplomatically handle the issue well due to its strong diplomacy. It was also able to get in touch with the separatists to get the remains of the victims out and bring the remains of the Malaysians home.

He however lamented that the government had often kept quite when it should not like the instances when many western countries had turned the tragedy into an opportunity for Russia bashing.

Another panelist Associate Prof Dr Chang Peng Kee a UKM expert in communications and crisis management said the tragedy showed the importance of having good crisis management plan so as to be able to deal with such a crisis well. He gave the MH370 tragedy as an example where the flow of information was not well synchronised.

The tragedy also brought to the fore the need for the country’s media and journalism be strengthened so that the people need not have to wait for international media like CNN, BBC or others to obtain news of events.

The other panelist Director of Psychology in the Public Services Department Prof Dr Abd Halim Mohd Hussin said a lot of people had lost their sense of empathy arising from the two tragedies involving the MAS flights.

Comments were made irresponsibly even by those expected to be ethical with some shared over social media merely for laughs.

They were 35 conspiracy theories about the MAS tragedy circulating in social media which had only distracted people from what is important while also not helping families of the victims.

Though the discussions did not reveal anything new the panelists had successfully brought the issue back on track to get justice for the victims.