UKM To Boost Research And Academic Partnerships With Thai Universities 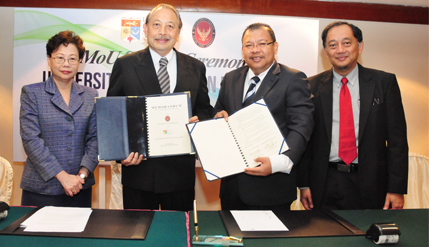 BANGI, 5 September 2014 – The National University of Malaysia (UKM) has reaffirmed its commitment to enhance and strengthen academic and research collaborations with various universities in Thailand.

A Memorandum of Understanding (MoU) was signed here today between UKM and the Royal Thai Embassy to consolidate the numerous existing working relationships between various faculties and institutes at UKM with a number of Thai universities.

The MoU is a renewal of the first formal cooperation signed last year to establish the UKM-Thai Windows to implement academic projects in which the Thai government sponsored its prominent professors to present papers at UKM seminars.

In his welcoming remarks Prof Noor Azlan said it was an honour for UKM to initiate the collaboration in the run-up to the 2015 ASEAN Community Intergration.

He noted that the Faculty of Social Sciences and Humanities had sent a delegation of students and staff to Chulalongkorn and Thammasat universities to enhance the teaching and learning of the Thai language.

Similarly students from Mahidol University’s School of Pharmacy as well as Yala and Rajabhat universities had spent a semester on UKM campus under a student exchange programme.

Kraichitti – whose tenure in Malaysia is ending soon – spoke of the digital data exchange programmes that could be developed to bring the universities of both countries even closer.

He said the UKM-Thai Windows made it easier for students in Malaysia to access databases in Thai universities. It should be developed further and a complimentary project be set up for students in Thailand to connect to digital directories in Malaysian institutions.

He praised UKM for having the relevant database and making them available online to libraries in Thailand.

He said student exchanges should be further developed and improved. The various types of collaborations already in place also needed to be streamlined so as to not to be duplicated or overlapped.