UKM has contributed greatly to the nation’s human capital needs 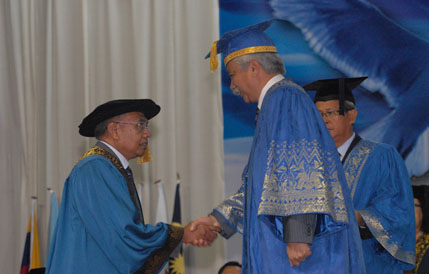 BANGI, 9 August, 2010 – Universiti Kebangsaan Malaysia (UKM) has not only succeeded in making the national language a language of knowledge dan intellectual reference but had helped in continuously producing the country’s human capital needs.

Former Vice Chancellor of University of Islamic Science Malaysia (USIM), Prof  Tan Sri Dato’ Dr Abdul Shukor Hj Husin recalled that when he was asked to serve as Vice Chancellor of the newly set up USIM in1999, he turned to his colleagues in UKM for help and support he needed to build up the new university.

Till today, many of the senior posts in USIM are held by lecturers from UKM, he said thanking the VC and UKM’s academic staff for assisting him to set up USIM into what it is currently.

He said this in his acceptance speech after being conferred the Honorary Ph.D (Islamic Studies)  by the Yang di-Pertuan Besar Negeri Sembilan Darul Khusus, Tuanku Muhriz Ibni Almarhum Tuanku Munawir, UKM’s Chancellor at the fifth session of its 38th Convocation today. Prof Shukor said he was proud to receive the award as it came from an institution of higher learning that is prestigious and outstanding in the country and the world.

He was proud that the university had achieved a standard of excellence that is recognised and urged the graduands to continue pursuing their studies to gain experience and skills until the end.

He quoted what Prophet Muhammad s.a.w. had stressed about knowledge as a life long quest. “Start this life with the will to acquire knowledge and keep this spirit on until death,” he said.

Earlier when reading the citation, Dean of Islamic Faculty, Professor Dr Mohd Nasran bin Mohamad said Dr Shukor received his bachelor’s degree in theology from UKM in1970, and a year later a Diploma in Education from Ain Shams University, Cairo. In 1973, he obtaianed his Master’s degree in Islamic principles and philosophy from Al-Azhar and his Ph.D in the same subjects at the university in 1984.

He currently heads the World Fatwa Research and Management Institute (INFAD) and is the Chairman of the National Fatwa Council.

Among others he also serves in the National Islamic Committee of Jakim, a member of the Islamic Religious Council and Malay Cultures Pahang, member of Board of Tabung Haji and Deputy Chairman of  World  Jurispudence Academy based in Saudi Arabia.