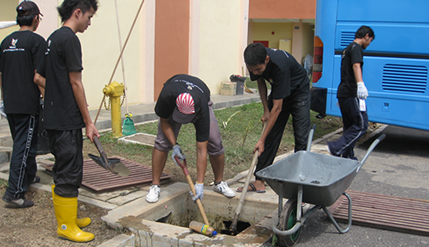 BANGI, 29 Nov. 2010 – Sixty UKM students from its Reserve Officers Training Unit (ROTU), SUKSIS (police officers reserve unit) and a few staff members had rendered help to some victims of the big flood in Kedah recently under the UKM flood Assistance Programme between Nov 12 to 15 recently.

The programme headed by its director, Prof Dr Ismail Bahari and his deputy, Lt Col Jury Tasripan extended help to clean a number of schools and mosques in Kubang Pasu and Pokok Sena from mud.

Among the schools were the Sekolah Kebangsaan Seri Muda, Alor Biak in Ayer Hitam and Sekolah Seri Banai in Jitra and the Bukit Baru mosque in Bukit Hijau, Pokok Sena where they presented a cow as sacrifice for the Hari Raya Aidil Adha given by the Vice Chancellor.

They also gave the mosque a new coat of paint while Prof Ismail as the director of the University-Community Liaison Office also presented five fans to the mosque.

They also handed over a sum of RM5,000 being  the collection made at UKM to a number of families and children from Kampung Bukit, Kampung Mengkuang and Kampung Baru.

Prof Ismail was satisfied with the assistance they had given saying that UKM and its students from ROTU and SUKSIS are always willing to render assistance to flood victims. 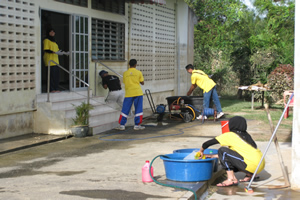 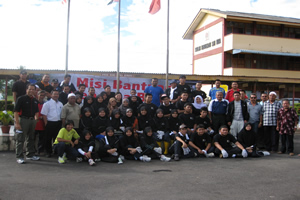