More than half of UKM graduates secured jobs before their convocation, a UKM tracer study shows 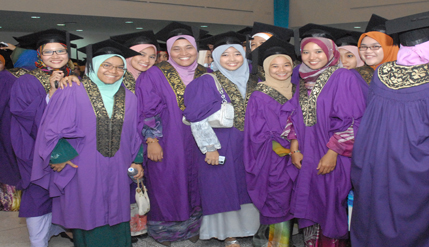 Another 834 (11.70 per cent) were awaiting placements, 1,811 (25.59 per cent) still searching for jobs with 187 wanting to improve their skills and another 447 (6.30 per cent) choosing to further their studies within the five months up to their convocation.

The study by UKM Alumni Relations Office also showed improvements from that in 2006 when only 1,968 graduates (38.54 per cent) from 5,105 have secured employment during the corresponding period with another 2,463 (48.25 per cent) not working.

The latest survey for the 2008/2009 session showed graduates from the Faculty of Dentistry did not have to wait long to secure employment as 93.3 per cent or 60 out of 64 of them were already employed by the time they received their scrolls with the remaining four awaiting for placements.

Graduates from the Faculty of Medicine also did not find difficulties in getting jobs with 190 (90.05 per cent) from 210 securing employment by then, with another nine awaiting placement, two furthering their studies and one choosing to take a break.

The then Director of the Alumni Office, Profesor Dato’ Dr Shaharuddin Ahmad said the survey was aimed at getting feedback on the studying process in UKM. The information gathered will help the university’s management in ensuring high quality education for the future and will also be used as a yardstick to measure the marketability of UKM graduates.

The feedback will be useful to improve the quality of UKM graduates through improved teaching and services rendered, he said.

The report also showed that of the other faculties, 495 (58.24 per cent) of the 850 who graduated from the Faculty of Economy and Management in 2009 have already secured employment by the time of their convocation especially those taking up banking and finance.

Statistics of graduates who have secured employment by the time of their convocation according to faculties are as follows:

Those not yet working then said they were either waiting for job placements, going for post graduate studies or still trying to find jobs.

The report also mentioned that most of the graduates from the Law Faculty have to undergo chambering since it is part of their compulsory training before being admitted as advocates and solicitors.

The graduates gave A- on UKM curriculum for its content and suitability and B+ on their valuation for theory and practical component, industrial training and efforts to prepare students for job placement.

The study also revealed that the graduates wanted to have additional programmes be made available to them to improve their skills including proficiency in English, improved inter-personel skills as well as ICT and entrepreneur training.

All this would equip them with added value and improve their marketability, the survey found.