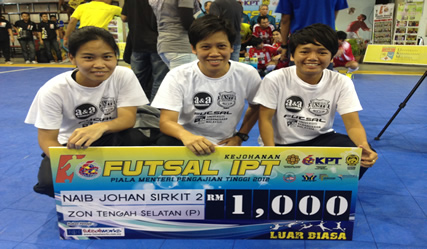 SUBANG, 29 April 2012 – The National University of Malaysia (UKM) women futsal team emerged as the first runner-up in the Higher Institution of Learning Futsal Championship 2012 for the Minister of Higher Education Trophy in the second circuit of the South Central Zone at the futsal feno here this evening.

Teams from UiTM won both the men and women’s event held for four days here.

The Selangor Community College was the runner-up in the men’s category with University of Management and Technology the second runner-up while the team from UPM won third placing in the women’s event.