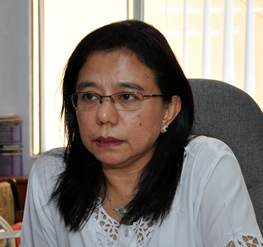 KUALA LUMPUR,  6 April 2012 – Researchers from The National University of Malaysia (UKM) have discovered that ‘tocotrienol’ (a form of Vitamin E) derived from palm oil, can strengthen brittle bones thereby reversing incidences of osteoporosis.

This discovery was made by Prof Dr Ima Nirwana Soelaiman and her team, Assoc Prof Dr Norazlina Mohamed, Assoc Prof Dr Ahmad Nazrun Shuid and Dr Norliza Muhammad of the Faculty of Medicine, UKM after a series of comprehensive studies.

Prof Ima who is Head of the Bone Metabolisme Research Group, said: “our extensive animal studies have shown that Tocotrienol can improve the bone structure of osteoporotic bone and bring it back to its original condition.”

Her work has won awards in international scientific expositions, such as at the Invention and New Product Exposition (INPEX2008), Pittsburgh, Pennsylvania, USA, 2008 [Gold Medal, Award of Merit] and 34th International Exhibition of Inventions, New Techniques and Products, Geneva, Switzerland, 2006 [Gold Medal, with Merit]. She has also published almost 80 scholarly articles in indexed journals, of which half are on vitamin E and bones.

Tocotrienol is a family of vitamin E which is derived from palm oil. In recent years, Tocotrienol has gained recognition as a potent antioxidant that protects cell membranes and DNA from free radical damage. Free radicals are by products generated when oxygen is converted into fuel for the human body. As an antioxidant tocotrienol prevents cellular damage. Therefore diseases such as osteoporosis which have strong oxidative component will benefit from tocotrienol.

Bone is made of a hard outer shell with a mesh of collagen (tough elastic fibres), minerals (including calcium), blood vessels and bone marrow. This mesh looks a bit like a honeycomb, with spaces between the different parts.

Healthy bones are very dense and thus the spaces inside the bones are small. However in bones affected by osteoporosis, the spaces are larger and this make the bones weaker, less elastic and more likely to break.

As a living tissue, bones constantly repair themselves in a process called bone turnover. There are cells which break down old bones (osteoclasts) and cells which build new bones (osteoblasts). Bones become brittle when the osteoclast activity predominate over osteoblast activity. This results in less bone, since bone is broken down at a faster rate than it can be replaced.

These fractures most commonly occur in the spine, wrist and hips but can affect other bones such as the arm or pelvis. A fracture is a huge problem to an osteoporotic patient, since osteoporotic bone is slow to heal and a fracture may not heal completely.

These patients will have to depend on others to do simple tasks such as going to the bathroom.

Osteoporosis is caused primarily by hormonal imbalance and women are four times more likely to get osteoporosis then men. When women reach menopause, their estrogen production will go down drastically, causing increased bone loss leading to osteoporosis. Women with a low pre-menopausal bone mass are more prone to develop osteoporosis. Tocotrienol can prevent this from occurring.

People who are on steroid treatment for asthma, arthritis and cancer can developed osteoporosis as a side effect. From her studies tocotrienol was also shown to reverse steroid induced osteoporosis.

Nicotine found in cigarrette smoke is another risk factor for osteoporosis. Chronic smokers have been shown to have lower bone mineral density compared to non-smoker. Studies by Prof Ima and her team have found that tocotrienol can reverse the osteoporosis and bring the bone back to normal once the nicotine intake was stopped.

Additional studies by Prof Ima and her team found that tocotrienol also enhanced the structure and strength of normal, non-osteoporotic bone. This indicates that tocotrienol can increase peak bone mass. High peak bone mass will reduce the risk of osteoporosis in later life. Her latest studies have shown that it can accelerate the process of fracture healing in osteoporotic bone.