An Old Book On The Semangs By A Czech Anthropologist Revisited 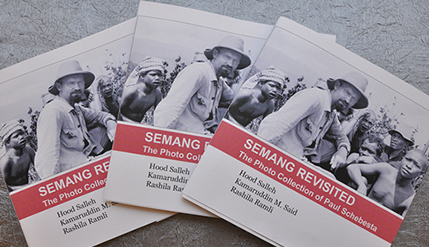 BANGI, 17 Aug 2012 – One of the earliest modern treatise about a tribe of Peninsular Malaysia’s Orang Asli societies, Among the Forest Dwarves of Malaya has been rediscovered and revisited by a Professor of Anthropology from The National University of Malaysia (UKM).

Prof Dr Kamaruddin Mohd Said said the book by a Czech missionary-cum-anthropologist, Paul Schebesta, published some 90 years ago could be the earliest academic work for the laymen written in a language other than English. The original manuscript of the almost-forgotten work filled with photographs was rediscovered along with negatives of the photos in a Czech archive at the end of last year.

The manuscript was brought to the attention to the government in Prague, which then alerted the Czech ambassador to Malaysia, who happened to be on good terms with a lecturer at the Faculty of Social Sciences and Humanities. The photographs were digitally restored and exhibited at UKM earlier this year.

What prompted him to it was the dearth of written eye-witness accounts on Malayan natives by Europeans other than the British. Schebesta, he said, also took the trouble to live with the Semang and learn their language, unlike many Orientalists at that time.

Prof Kamaruddin said Schebasta’s book, first published in 1924 in German, created quite a stir back then and had undergone several reprints until 1928. The anthropologist said Westerners then, as now, were fascinated by people who they perceived as being primitive, savage and heathen.

He felt that Schebesta might have been struck by a perceived resemblance of the Semang people to the African pygmy, despite the great geographical distance between Africa and South-East Asia.

Such publications were designed to reinforce the old stereotypes and clichés about Europeans being the most intelligent and powerful society who should civilize and “save the unbelieving” pagans from damnation.

However, the book and the interest in Malayan aboriginal peoples was then all but forgotten as tastes changed in the West and the fad moved to the subjects of other “exotic” peoples in the East.

Prof Kamaruddin is an avid photographer whose pictures have been exhibited as works of arts at home and abroad. He personally supervised the restoration of the old photographs for the coffee-table book Semang Revisited, which he said is a tribute of sorts to Schebasta’s effort.

Semang Revisited, A Photo Collection compares what the Czech anthropologist wrote about and his pictures, with contemporary accounts and the latest photographs of the Orang Asli tribe. 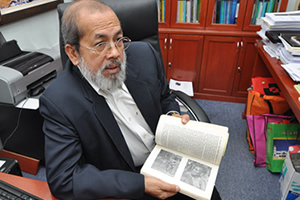 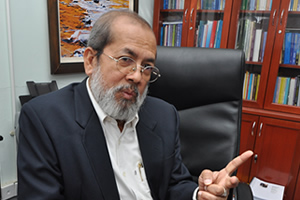 Prof Kamaruddin noted that while the pictures of the Semang did not seem to have changed much over 90 years , the inherent transformation of their lives were remarkable in the same period. The comparison make for some interesting studies by anthropologists.

Paul Schebesta, who died in 1967 at the age of 80, was in the peninsula in 1924 and 1925 to study the Semang community, among whom he lived in their jungle world. Schebesta worked in the areas of physical anthropology, ethnology and linguistics. He did not accept other anthropologists’ theory that the Semang “pygmies” were a variation or subspecies of ancient mankind but were in fact a species of Homo Sapiens.

Neither did he accept, as others did then, that slightly-built Semang were a degenerative form of humankind and defended their primary-primitive status as a category in its own right. The main contribution to pygmy ethnology made by Schebesta was to be the first to give a rich description of the culture of the pygmies of Southeast Asia and Africa.

In addition to the academic side of his research, Schebesta also set out to help his small forest friends uncover the way to fit into the large picture of the development of mankind to avoid being sidelined by modern civilisation, according to a biographical note on him.

Prof Kamaruddin  is a professor of sociology, specialising in the sociology of industrial relations, at the Faculty of Social Sciences and Humanities. He is also the Director of UKM Press, the publication arm of the university.

He obtained his PhD in anthropology from the University of California, Berkeley. His research interest covers diverse topics: conflict, mediation and arbitration in industrial relations in Malaysia, the fishing economy from an anthropological perspective, the sociology of (Malay) literature, and the culture of aboriginal communities in Peninsular Malaysia.

Prof Kamaruddin has published numerous books and journal articles on industrial relations and the fishing economy as well as on the transformation of cultures of aboriginal communities in Malaysia. In addition, he has served as an editorial advisor for Sociology, a journal published by the British Sociological Association. One of the highlights of his carrier was his appointment as a visiting scholar at Tsukuba University, Japan.